Translation and Ideology
Encounters and Clashes 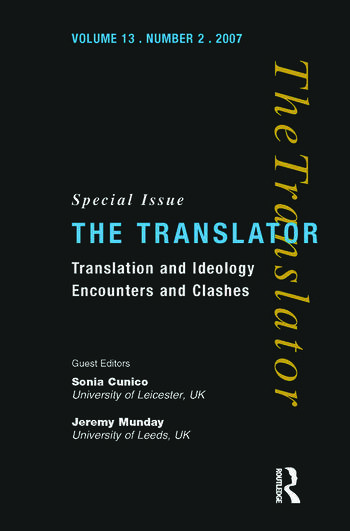 Translation and Ideology: Encounters and Clashes

Ideology has become increasingly central to work in translation studies. To date, however, most studies have focused on literary and religious texts, thus limiting wider understanding of how ideological clashes and encounters pervade any context where power inequalities are present.  This special edition of The Translator deliberately focuses on ideology in the translation of a rich variety of lesser-studied genres, namely academic writing, cultural journals, legal and scientific texts, political interviews, advertisements, language policy and European Parliament discourse, in all of which translation as a social practice can be seen to shape, maintain and at times also resist and challenge the asymmetrical nature of exchanges between parties engaged in or subjected to hegemonic practices.

The volume opens with two ground-breaking papers that investigate the nature and representation of truth and knowledge in the translation of the sciences, followed by two contributions which approach the issue of shifts in the translation of ideology from the standpoint of critical linguistics and critical discourse analysis, using data from political speeches and interviews and from English and Korean versions of Newsweek. Other contributions discuss the role that translation scholars can play in raising public awareness of the manipulative devices used in advertising; the way in which potentially competing institutional and individual ideologies are negotiated in the context of interpreting in the European Union; the role translation plays in shaping the politics of a multilingual nation state, with reference to Belgium; and the extent to which the concepts of norms and polysystems may be productive in investigating the link between translation and ideology, with reference to Chinese data.

Epistemicide! The Tale of a Predatory Discourse, pp. 151-169

English academic discourse, which emerged in the 17th century as a vehicle for the new rationalist/scientific paradigm, was initially a vehicle of liberation from the stifling feudal mindset. Spreading from the hard sciences to the social sciences and on to the humanities, it gradually became the prestige discourse of the Anglophone world, due no doubt to its associations with the power structures of modernity (technology, industry and capitalism); today, mastery of it is essential for anyone wishing to play a role on the international stage. The worldview that this discourse encodes is essentially positivist; it privileges the referential function of language at the expense of the interpersonal or textual and crystallizes the dynamic flux of experience into static, observable blocs, rendering the universe passive, inert and devoid of meaning. Despite its obvious limitations for dealing with a decentred, multi-faceted, post-modern reality, its hegemonic status in the world today is such that other knowledges are rendered invisible or are swallowed up in a process of 'epistemicide'. This paper examines this process from the point of view of the translator, one of the primary gatekeepers of western academic culture. Drawing on surveys carried out in 2002 of Portuguese academics working in the humanities, it attempts to discover just what happens to the very different worldview encoded in traditional Portuguese academic discourse during the process of translation, and goes on to discuss the political and social consequences of the ideological imperialism manifest in editorial decisions about what counts as 'knowledge' in today's world.

The goal of this study is to illustrate the relevance of an analysis of  translation to the public communication of science from a gender perspective, with gender understood as a primary way of signifying power relationships between men and women. The article first offers an outline of a theoretical framework that allows us to approach the discourse of the public communication of science and the discourse of its translation as the outcome of activities involved in the production of scientific knowledge and as a crucial point in the interface between science and society. Translation constitutes an important factor in this context due to the globalized character of certain discursive practices. Discourses on the human body are understood here as constituting an important element in the ideological definitions of man and woman, and this study therefore interrogates a discursive mini-corpus on the question of sexual determination produced in the early years of this millennium. The author attempts to demonstrate how - by means of reworking and reincorporating textual material in discursive macrostructures that go beyond the relation between source and target text - translations are permeable to opposed ideological positions and are dependent on the context in which the translated discourses emerge.

This article investigates essential questions regarding ideology and language from a translation studies perspective. Adopting a broad-based approach, it examines what is meant by 'ideology' and how it is treated in translation studies, where it has primarily been linked to manipulation and power relations. However, this article focuses on the ideology of the individual translator. Following Simpson and Van Dijk, it considers ideology to be constructed from the knowledge, beliefs and value systems of the individual (in our case, the translator) and the society in which he or she operates. The main interest is in how ideology in its many facets is conveyed and presented textually in translation and how analysis drawn from within monolingual traditions (such as critical discourse analysis and the tools of systemic-functional analysis) may not always be the most appropriate to detect and classify the shifts that take place. Examples are analyzed of translations of speeches and other political writings and interviews with revolutionary leaders in Latin America (Castro, Marcos, Chávez).

This paper explores the translation of news discourse in terms of the way in which recontextualization of discourse across the boundaries of language, culture and institutions results in the transformation, as well as transfer, of information. Based on a comparative analysis of news stories on North Korea published in Newsweek and Newsweek Hankuk Pan (Korean edition), the study examines how North Korea is (re)constructed in translation. The primary focus is on the translating context and the producers of translated news stories as they engage in an institutional routine to re-situate the source text (discourse on North Korea by Newsweek journalists), which is anchored in a specific discourse context (the context of a Newsweek story being written and published for original Newsweek readers), into the translating situation (the context of producing a translated story at Newsweek Hankuk Pan) for a new context of use (the context of reception by South Korean readers of Newsweek Hankuk Pan). As the producers of translated news at Newsweek Hankuk Pan link the two situations, elements of the prior discourse as manifested in the source text are lifted from the original setting, re-perspectivized, differently foregrounded, silenced, elaborated on or blended with other voices. The findings suggest that contrary to the lay perception of translated news as a complete and accurate representation of the intention and meaning of the source text writer, news translation as recontextualization practice is a complex site of institutional goals and procedures, coupled with tension and conflict among different representations, ideologies and voices.

Translators and Translation Studies: Scholars as Inoculators of Resistance, pp. 243-269

The present article examines the role of translation studies in mediating the hegemonic ideology of the New Consumerism, of which advertising is a pivotal mouthpiece. The TS-inspired perspective proposed here draws on green activism, psychology and race and feminist studies, and makes particular use of semiotics as a tool of analysis. The critical method adopted throughout consists of a series of three inoculations (Sagarin et al. 2002) of increased complexity, which seek to raise awareness, principally among translation scholars themselves, with respect to their potential role in exposing and contesting some of the ethically negative aspects of advertising today. Stage one of inoculation draws on a basic understanding of Saussure's approach to the sign; stage two complements the previous inoculation with Barthian concepts of denotation and connotation; stage three focuses on intertextuality's systemic, social and subjective nuances. It is argued here that resisting the New Consumerism will benefit from the input of translation scholars. Proposals for engaging with a TS propramme of resistance bring to the fore textual meanings and meaning potentials that we, as consumers, cannot afford to ignore. It is further argued that translation studies will also benefit from participating in this programme of resistance.

Interpreted Ideologies in Institutional Discourse: The Case of the European Parliament, pp. 271-296

This article investigates the impact of simultaneous interpretation on ideology in the European Parliament, drawing on a larger empirical study (Beaton, in progress). The traditional Marxist definition of ideology is first rejected before a broader definition of ideology as 'common sense' is employed. The concepts of hegemony and axiology are then introduced to account for the struggle between the dominant institutional ideology and subjective interpreter beliefs and ethics. Comparative data analysis of German source texts and English target texts from European Parliament plenary sessions focuses on lexical repetition of key terms and hegemonic conceptual metaphor strings. The findings suggest that EU institutional hegemony is strengthened by simultaneous interpreters, primarily through extensive use of conceptual metaphor strings in the interpretation. In addition, contrary to conduit views of communication, this study provides evidence of interpreter mediation and agency and demonstrates that the simultaneous interpreter is an additional subjective actor in heteroglot communication.

This article assesses the strengths and weaknesses of the influential work of Itamar Even-Zohar and Gideon Toury in the light of the increasing attention given to the relation between translation and ideology since the 'cultural turn' in translation studies in the early 1990s. It is argued that we should reject universalist assumptions and focus instead on the social embedding of texts if the concepts of norms and polysystems developed by Even-Zohar and Toury are to be usefully applied to understanding translation in relation to ideology. The work of Even-Zohar and Toury is reread with reference to the writings of Mikhail Bakhtin, in order to identify the elements most useful and relevant to research on the relation between translation and ideology. Specifically, the article attempts to demonstrate how the concepts of norms and polysystems can be used to situate translations in their specific cultural and historical contexts, to set in relief the ideological issues involved, and to link up the macroscopic and microscopic levels of investigation. Rather than searching for laws of translation, the idea is to show how 'adequacy' and 'acceptability' can combine in a translation to offer a critique of the dominant ideology. To illustrate these points in more detail, a translation project launched in Hong Kong in the 1950s is used as a case study.