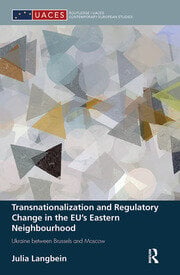 Transnationalization and Regulatory Change in the EU's Eastern Neighbourhood: Ukraine between Brussels and Moscow

Regulatory reforms in the EU’s Eastern neighbourhood countries are not as sluggish as often perceived. Rule enforcement is happening despite the presence of domestic veto players who favour the status quo, the lack of EU membership perspective and the presence of Russia as an alternative governance provider.

Using Ukraine as a primary case study, this book examines why convergence with transnational market rules varies across different policy sectors within the Eastern neighbourhood countries. It analyzes the drivers of regulatory change and explores the conditions under which post-Soviet economies integrate with international markets. In doing so, it argues that the impetus for regulatory change in the Eastern neighbourhood lies in specific strategies of domestic empowerment applied by external actors. Furthermore, through the study of the impact of Western and Russian transnational actors, the book concludes that Russia’s presence does not necessarily hinder the integration of the EU’s Eastern neighbours with international markets. Instead, Russia both weakens and strengthens domestic support for convergence with transnational market rules in the region.

This book will be of key interest to students and scholars of European/EU studies and international relations, especially in the areas of regulatory politics, transnational governance, public policy, and post-Soviet transitions.

Julia Langbein is Senior Research Fellow at the Center for European Integration at Freie Universität Berlin, and Scientific Coordinator for the FP7 research project "Maximizing the Integration Capacity of the European Union" (MAXCAP). Her research interests include European integration and the comparative political economy of Eastern Europe.

"Langbein’s fascinating new book is the first to treat systematically the European Union and Russia as truly duelling regulatory forces. Focusing on a case study of Ukraine, she provides a nuanced picture of when and where regulations converge with either EU or Russian preferences. Her focus on ‘domestic empowerment’ is especially welcome."

"This is a highly relevant and timely book, an important contribution to the literature of transnational market making. By exploring various patterns of transnationalization in the Ukrainian economy, the book offers clear and sharp analytical tools to understand the links between regulatory convergence, economic development and regional stability. A must read for students of the political economy of Europeanization in the peripheries of Europe and for everyone who wants a better grasp of the regional dimensions of the present crisis in Ukraine."

"This book is a timely reminder that behind the scenes of the battle for territory and influence unfolding in Eastern Ukraine, global competitive pressures and domestic regulatory capacity building play an important role in determining Ukraine’s convergence with European Union standards."

"Julia Langbein's Transnationalization and Regulatory Change in the EU’s Eastern Neighbourhood is an excellent and lucid account of institutional change in post-communist Ukraine. It is a first class study of regulatory change and its sources in areas far away from the gaze of most of the scholars of European Union and comparative regulation and transnationalization. I expect this rigorous and theoretically rich study to serve as an authoritative account of regulation and transnationalization and as an example to follow in the study of other sectors, issues, countries and eras."

David Levi-Faur, Professor at the Federmann School of Public Policy and the Department of Political Science, The Hebrew University of Jerusalem, Israel.