Transport Lessons from the Fuel Tax Protests of 2000 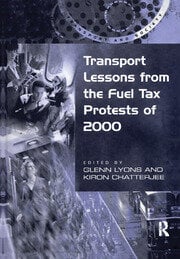 Transport Lessons from the Fuel Tax Protests of 2000

The UK fuel tax protests of September 2000 generated considerable debate about fuel prices and taxation and put transport in the media spotlight. Away from the immediate events and debates surrounding the protests, the experience offered the opportunity for longer-term lessons on transport to be gained. The editors of this volume, Glenn Lyons and Kiron Chatterjee, saw the opportunity to get fresh insight into car dependence and conducted a large-scale travel behaviour survey to find out how car users coped when restricted in being able to buy petrol. This book presents their findings and collects together articles written by other researchers on a range of topics including fuel taxation, transport pricing, policy acceptability, travel behaviour and goods distribution.

Contents: An Appreciation of the Roots of the Fuel Tax Protests: Fuel tax protests and fuel rationing - an historical perspective, Reg Harman; Pro-car or anti-car? environment, economy and liberty in UK transport debates, Paul Rosen; Fuel taxation and an account of the fuel tax protests in France, Patrice Salini; Fuel taxes and the environment - economy trade off, Greg Marsden; Are fuel prices important? Phil Goodwin. Empirical Evidence of the Impacts of a Fuel Shortage: The effect of the fuel crisis on sections of the English motorway network, David Eves, James Quick, Paul Boulter and John Hickman; Travel behaviour of car users during the UK fuel crisis and insights into car dependence, Kiron Chatterjee and Glenn Lyons; A telephone survey of stated travel responses to fuel shortages, Neil Thorpe, Michael Bell, John Polak and Robert B. Noland; Stages of change in drivers' willingness to reduce car use, before and during the UK fuel crisis, Susan Beatty, Michelle Meadows and David White; Effective fuel management in road transport fleets, Tony Whiteing, Michael Coyle and Colin Bamford. Learning from Crises: Experiences and lessons from conducting an emergency survey of motorists during the UK fuel crisis, Glenn Lyons and Mark Beecroft; Crisis or drama? - a summary of the response to the fuel crisis in the UK, Greg Marsden and Mark Beecroft; The top of the escalator?, Graham Parkhurst; What can be learned by studying transport crises? Peter Bonsall; Name Index.

’...a definitive view of the September 2000 fuel crisis.’ Teletext ’Given the extraordinary circumstances in which the research and the book were conceived, the fact there is any such research output is impressive, while the existence of such a comprehensive account is remarkable.’ Local Transport Today '...Provides an interesting overview of the drift in transport policy over the last three decades which no government has yet managed to address effectively.' Parliamentary Affairs 'As a contribution to knowledge this book is outstandingly welcome and its value will remain substantial for all who seek to understand 'what happened and why'...praiseworthy work of analysis.' The Journal of Transport History