Treating Mind and Body
Essays in the History of Science, Professions and Society Under Extreme Conditions 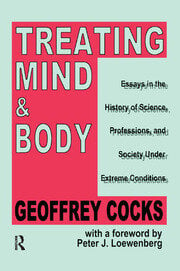 Treating Mind and Body: Essays in the History of Science, Professions and Society Under Extreme Conditions

As historians rediscover human society to be as much about desire, fantasy, and irrationality as it is about interest, reality, and reason, the history of psychoanalytic thought takes on an increasing significance. Its growth and interconnection with other fields appealed to the eclectic and holistic interests of historians so much so that the term "psychohistory" was coined, admiringly, ambivalently, or perjoratively. The methodological intersection of psychology and history also helped move us toward a more inclusive social history through investigation of the institutional history of medical sciences of the mind.Treating Mind and Body examines the recent history of psychotherapy, psychoanalysis, and medicine in Germany through a series of original essays by Geoffrey Cocks. The first section, "Psychotherapy," analyzes the history of psychotherapy in the Third Reich and includes such essays as "The Professionalization of Psychotherapy in Germany" and "The Nazis and C.G. Jung," which examines Jung's association with the Nazi regime and the rift between Jungians and Freudians.Section two, "Psychoanalysis," considers the repression of memory evident among German psychoanalysts, a more disturbing historical reality than the traditional view of a Nazi destruction of psychoanalysis. Essays include "Psychoanalysis and Psychotherapy in Germany Since 1939," as well as a discussion of Heinz Kohut's "self psychology" in light of Kohut's life experience in Austria and America. In section three, Cocks treats medicine, the history of professions, and the increasing awareness among historians of the place of medicine hi Nazi plans and projects. Essays include "Jews and Medicine in Modern German Society" and "The Nuremberg Doctor's Trial and Medicine in Modern Germany."As a historian of Germany, psychoanalysis, and medicine, Cocks's writings reflect an abiding interest in the intersections of psychology and history. To his selection of previously published essays he adds a new introduction, placing the essays in newer, richer contexts. This book will be of interest to psychologists, psychiatrists, and psychotherapists, as well as those in the fields of medicine, history, and sociology.