Trends in Policing
Interviews with Police Leaders Across the Globe, Volume Three 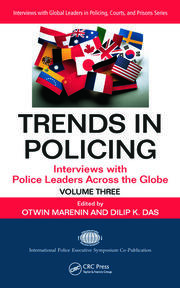 Trends in Policing: Interviews with Police Leaders Across the Globe, Volume Three

Several years ago, the Trends in Policing series unveiled insiders’ accounts of how police leaders perceive the work they do. These volumes feature interviews with practitioners who speak candidly about their concerns and opinions. They present their evaluations of programs and philosophies that worked and those that did not, describe their conceptions of success and failure, and offer the experiences and insights gained from living the police life. Composed of new interviews, Volume Three continues in the tradition of providing a revealing depiction of diverse police perspectives across a range of different cultures.

The environments in which the subjects of these interviews operate differ vastly in terms of political life, economic resources, social structures, police-community relations, and transnational interactions. Some work in very large organizations; others, in tiny departments. Some are engaged in high-tech environments and others struggle with outdated equipment. Some must contend with routine political interference as others proceed with minimal influence. And some enjoy popular confidence while others are widely despised. The vast range of experiences profiled demonstrates how context significantly determines how police leaders feel about their work.

Sociological studies by academics are plentiful in the policing literature. But police leaders possess an abundance of knowledge that can complement, challenge, and support the more cerebral, scholarly treatments. This thoughtful perspective from the vantage point of individuals in the field enables a balanced understanding of the nuances and dynamics of police culture, elevating the topic to a heightened level of discourse.

Interview With Raymond Kendall, Honorary Secretary General of Interpol and Chairman of the Center of Excellence on Public Security’s Senior Advisory Board; Interviewed by André Matheus e Souza and George Howell

An Interview With Richard Monk, Police Advisor to NATO and Independent Consultant; Interviewed by Kate Story-Whyte

Dilip K. Das served as a police chief before joining academia. He is the founding president of International Police Executive Symposium, which brings police researchers and practitioners together to facilitate cross-cultural, international, and interdisciplinary exchanges for the enrichment of the profession. Dr. Das also serves as the founding editor-in-chief of Police Practice and Research: An International Journal. His publications include more than two dozen books and numerous articles. He is a professor of criminal justice and a human rights consultant to the United Nations.

Otwin Marenin is a professor in the criminal justice program at Washington State University. He received his BS degree from Northern Arizona University and his MA and PhD degrees (in comparative politics) from UCLA . He has taught at Ahmadu Bello University and the University of Benin in Nigeria and the Universities of Baltimore, California, Colorado, and Alaska-Fairbanks in the United States. His research and publications have focused on policing systems in Native American communities in the United States and communities in Africa, especially Nigeria. More recent, he has done research and written on developments in international policing, police in UN peacekeeping operations, transnational police assistance programs, and efforts to reform the policing systems in failed, transitional, and developing states.

" … a resource of immense value to academic analysts of policing philosophies, leadership, contemporary change and likely futures, as well as to policy-makers and practitioners who wish to have a sense of where the leaders in their field have come from and are going."
—Robert Reiner, London School of Economics, Professor Emeritus