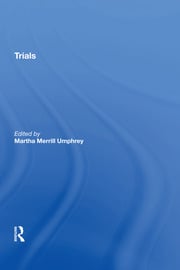 This volume gathers a collection of the most seminal essays written by leading experts in the fields of law, and cultural studies, which address the cultural dimension of trials. Taken together, these essays conceive of trials as sites of legal performance and as critical public spaces in which the law both encounters and interacts dialogically with the culture in which it is embedded. Inquiring into the contours of that dialogic relation, these essays trace the paths of cultural stories as they circulate in and through trial settings, examine how trials emerge out of particular social and historical contexts, and suggest ways in which trials themselves, as both singular events and generic forms, circulate and signify in culture.

Contents: Introduction: legal performances and public cultures; Part I Trials as Sites of Performance and Narrative: 'The play's the thing': an unscientific reflection on courts under the rubric of theater, Milner S. Ball; The lawfulness of the American trial, Robert P. Burns; An analysis of closing arguments to a jury, Anthony G. Amsterdam and Randy Hertz; Law frames: historical truth and narrative necessity in a criminal case, Richard K. Sherwin; Speaking of death: narratives of violence in capital trials, Austin Sarat. Part II Evidence and the Production of Truth: Just the facts, Ma'am: sexualized violence, evidentiary habits and the revision of truth, Kim Lane Scheppele; Theaters of proof; visual evidence and the law in Call Northside 777, Jennifer L. Mnookin and Nancy West; Film as witness: screening Nazi Concentration Camps before the Nuremberg Tribunal, Lawrence Douglas; A reporter at large: doubt, William Finnegan. Part III Dialogics of Law and Culture: Story and transcription in the trial of John Brown, Robert A. Ferguson; Rats, pigs, and statues on trial: the creation of cultural narratives in the prosecution of animals and inanimate objects, Paul Schiff Berman; Constructing a common language: the function of Nuremberg in the problematization of postapartheid justice, St ane Leman-Langlois; 'The Trial': a parody of law amid the mockery of men in post-colonial Papua New Guinea, David Lipset; Forms of judicial blindness, or the evidence of what cannot be seen: traumatic narratives and legal repetitions in the O.J. Simpson case and in Tolstoy's The Kreutzer Sonata, Shoshana Felman; Index.