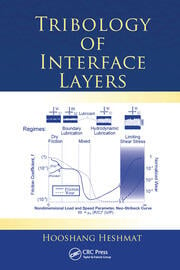 To this point, the field of lubrication has been conceptualized using several noncontiguous modes of operation — boundary, fluid-film, and dry and solid lubrication. Engineers and analysts have long had to deal with old evidence that many tribological devices, such as flat surface and centrally pivoted sliders, can act as viable bearings — contradicting basic hydrodynamic theory.

Tribology of Interface Layers introduces a new concept wherein disparate modes are shown to actually be particular phases of a tribological continuum spanning a wide array of material lubricants. The author details these phenomena and presents a novel definition of lubricants as intermediate layers.

The book illustrates that contrary to previous understanding, the various lubrication modes — from dry to hydrodynamic to powder lubrication — all overlap each other within a tribological spectral continuum. It also elucidates the fact that bearings, seals, dampers, and similar devices using submicron powder lubricants possess quasi-hydrodynamic characteristics akin to conventional fluid films. Similarly, powder films possess quasi-hydrodynamic features that enable them to act as conventional fluid film bearings. The field of tribology has traditionally been presented in terms of disparate regimes, but this method of classification lacked sufficient rigor. This volume explains that characterization and treatment of any one regime may require the simultaneous accounting of several different modalities that are present in a particular mode of operation. Based on experimental and theoretical work, this text shows how the interdependence of powder and hydrodynamic lubrication exemplifies that perpetuity in tribological processes.


Author Hooshang Heshmat was on hand for a

Dr. Hooshang Heshmat is Lead-Founder and President/CEO & Technical Director of Mohawk Innovative Technology, Inc. (MiTi), an internationally renowned applied research and product development company dedicated to green technology. His company specializes in the design, integration and development of mechanical components such as advanced oil-free foil bearings, seals, and dampers, including powder, solid film coatings and dry and fluid film bearings into high-speed oil-free rotating machinery systems. Developed rotating machines employing his novel tribological devices include oil-free compressors, high-speed motors and generators, and gas turbine engines down to Mesoscopic sizes. He has developed special tribological testing methods and measurement techniques and has designed and fabricated the corresponding component test equipment. Dr. Heshmat has established MiTiHeart® one of the premier biotechnology companies in the Albany area based on their unique heart pump system, which uses magnetic levitation.

Dr. Heshmat received his BSME from Pennsylvania State University and his MSME and Ph.D. in Mechanical Engineering from RPI. He is the leading authority in foil bearings and powder lubrication technologies. He has