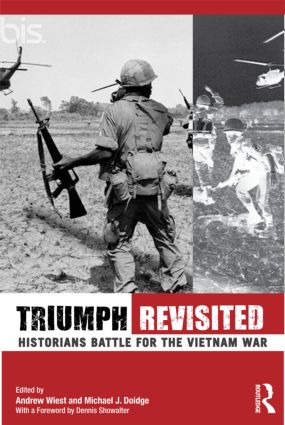 More than thirty years later, the Vietnam War still stands as one of the most controversial events in the history of the United States, and historians have so far failed to come up with a definitive narrative of the wartime experience. With competing viewpoints already in play, Mark Moyar’s recent revisionist approach in Triumph Forsaken has created heated debate over who "owns" the history of America’s war in Vietnam.

Triumph Revisited: Historians Battle for the Vietnam War collects critiques of Triumph Forsaken from both sides of this debate, written by an array of Vietnam scholars, cataloguing arguments about how the war should be remembered, how history may be reconstructed, and by whom. A lively introduction and conclusion by editors Andrew Wiest and Michael Doidge provide context and balance to the essays, as well as Moyar’s responses, giving students and scholars of the Vietnam era a glimpse into how history is constructed and reconstructed.

"[T]he book provides, in a relatively brief format, an excellent introduction to, and overview of, the major controversies and conflicts in the historiography of the early years of the Vietnam War … Recommended" – Choice

"In Triumph Revisited, Wiest and Doidge have collected Moyar's critics (and there are many) to explain why the standard explanations for the United States' failure in Vietnam-its exaggerated Cold War fears, its hopeless client, and its incoherent strategy-remain compelling. Moyar is allowed a spirited defense. The collection demonstrates the importance of debate as a way of illuminating important issues and questioning established positions." – Foreign Affairs

Introduction: Historians and the Vietnam War by Andrew Wiest

Section 1. The Vietnam War in an Asian Perspective

Andrew Wiest is Professor of History and Co-Director of the Center for the Study of War and Society at the University of Southern Mississippi. He is the author of Vietnam’s Forgotten Army: Heroism and Betrayal in the ARVN and co-editor of America and the Vietnam War: Re-examining the Culture and History of a Generation (Routledge).

Michael J. Doidge is a doctoral candidate in History at the University of Southern Mississippi. He is currently writing his dissertation, An Army Worth Fighting For: Doctrinal, Strategic, and Bureaucratic Transformation in the U.S. Army from 1946-1964.