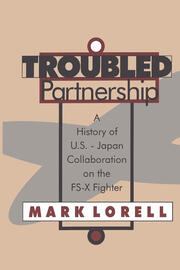 Troubled Partnership: History of US-Japan Collaboration on the FS-X Fighter

During World War II, Japanese fighters, such as the famed Zero, were among the most respected and feared combat aircraft in the world. But for decades following the defeat of Japan in 1945, a variety of political and economic factors prevented Japan from developing its own modern national fighter.

This changed in the 1980s. Japan began independently developing its first world-class fighter since World War II. After several years of contentious negotiations, the Japanese agreed to work with the United States to cooperatively develop a minimally modified F-16, the FS-X. The new fighter, however, has evolved into a world-class aircraft developed largely by Japanese industry primarily due to errors committed by the U.S. side. By the fall of 1995, fifty years after the end of World War II, the Zero for the 1990s will have made its first flight, catapulting Japan into the elite ranks of nations capable of developing the most advanced weapon systems.

In Troubled Partnership, Mark Lorell traces the evolution of the FS-X, disclosing the conflicting economic and security objectives advanced by U.S. officials, the flawed U.S. policy of technology reciprocity, and the challenges of international collaboration. Its deep intimacy with the interplay of policy and economy will make this volume of intense interest to political scientists, military studies specialists, historians, and government officials.