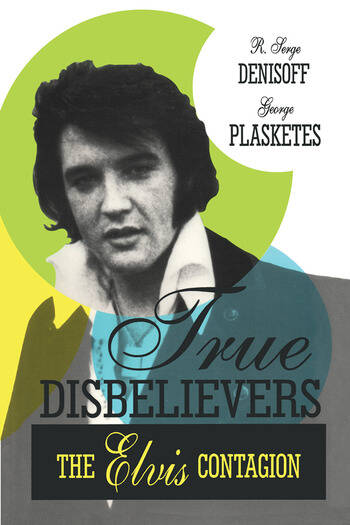 The legion of fans who refuse to believe that Elvis Presley died August 16, 1977 has been a major force behind the ever-expanding, elusive, and enduring Elvis myth during the past seventeen years. This network of fervent true believers engages in activities that include a melange of sightings and conspiracy theories. Mass media coverage of these phenomena has evolved from the underground grass-roots level to widespread publicity with social, religious, commercial, and ideological underpinnings. In True Disbelievers, R. Serge Denisoff and George Plasketes examine the implications of various accounts and several perspectives on Elvis Presley's death and transfiguration.

Denisoff and Plasketes also analyze the various media that those who doubt Elvis's death use to popularize their positions, including television, magazines, and books. They review the work of others who have written on the subject, such as Gail Brewer-Giorgio and Major Bill Smith, and raise provocative, yet valid questions about the phenomenon they describe. True Disbelievers takes a pointed look at the music industry as well, and how it has used and commercially benefitted by the continuing belief that Elvis lives. They examine common strands in the many reports of Elvis sightings since Presley's reported death.

Denisoff and Plasketes describe the Elvis phenomenon in serious, objective as well as empathetic terms, placing it in the context of studies of cult figures and their followers. True Disbelievers contains a great deal of fascinating information about America's popular culture and the power and influence of the media in modern society. It will be of significant interest to communication studiesscholars,sociologists,professionals in the music and media industries, and those interested in popular culture.