Trust and Confidence in Government and Public Services 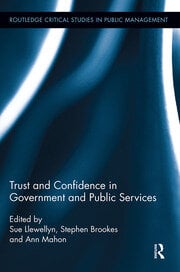 Trust and Confidence in Government and Public Services

Trust and confidence are topical issues. Pundits claim that citizens trust governments and public services increasingly less - identifying a powerful new erosion of confidence that, in the US, goes back at least to Watergate in the 1970s. Recently, media exposure in the UK about MP expenses has been extensive, and a court case ruled in favor of publishing expense claims and against exempting MPs from the scrutiny which all citizens are subject to under ‘freedom of information.’ As a result, revelations about everything from property speculation to bespoke duck pond houses have fueled public outcry, and survey evidence shows that citizens increasingly distrust the government with public resources.

Sue Llewellyn is Professor of Accountability and Management Control and Director of the Herbert Simon Institute at Manchester Business School, University of Manchester, UK.

Stephen Brookes is a Senior Fellow in Public Policy and Management and Head of the Innovation in Government subject group at Manchester Business School, University of Manchester, UK. He is editor (with K. Grint) of The New Public Leadership Challenge (2010).

Ann Mahon is a Senior Fellow in Healthcare and Public Sector Management at Manchester Business School, University of Manchester, UK. She is editor (with K. Walshe and N. Chambers) of A Reader in Health Policy and Management (2009).