Truth on Trial in Thailand
Defamation, Treason, and Lèse-Majesté 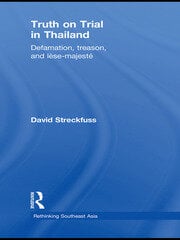 Truth on Trial in Thailand: Defamation, Treason, and Lèse-Majesté

Since 2005, Thailand has been in crisis, with unprecedented political instability and the worst political violence seen in the country in decades. In the aftermath of a military coup in 2006, Thailand’s press freedom ranking plunged, while arrests for lèse-majesté have skyrocketed to levels unknown in the modern world. Truth on Trial in Thailand traces the 110-year trajectory of defamation-based laws in Thailand. The most prominent of these is lèse-majesté, but defamation aspects also appear in laws on sedition and treason, the press and cinema, anti-communism, contempt of court, insulting of religion, as well as libel. This book makes the case that despite the appearance of growing democratization, authoritarian structures and urges still drive politics in Thailand; the long-term effects of defamation law adjudication has skewed the way that Thai society approaches and perceives "truth."

Employing the work of Habermas, Foucault, Agamben, and Schmitt to construct an alternative framework to understand Thai history, Streckfuss contends that Thai history has become "suspended" since 1958, and repeatedly declining to face the truth of history has set the stage for an endless state of crisis.

This book will be of interest to students and scholars of South East Asian politics, Asian history, and media and communication.

David Streckfuss is an independent scholar who has lived in Thailand for more than 20 years. His work primarily concerns human rights, and political and cultural history.

Introduction: The Defamation Dilemma of Thailand  1. The Truth Recently Discovered  2. Regimes of Truth, Regimes of Defamation  3. Truth and Treason in Old Siam  4. Chronology of Thai Defamation-Based Laws  5. Normalizing "Abnormal Times" and the Endless State Of Exception  6. Intent and Import  7. The Insulted and Defamed (The Individual to the Nation)  8. The Insulted and Defamed (Monarchy and Lèse-Majesté)  9. The People  10. Culture and Traitor  11. Thai-ification And Colonisation  12. Defamation and Truth  13. Conclusion  Appendix – Thai Defamation-Based Laws, 1900 to Present

David Streckfuss is Director of the CIEE Research and Development Institute at Khon Kaen University, Thailand

"This big, brave and important book argues that defamation laws are the cornerstone of Thailand's authoritarian political culture. They have strangled the media, wrecked public debate, undermined artistic and intellectual work, and ensured impunity for a long litany of state crimes. They underpin an authoritarian control of thought and expression that is extraordinary in a country that likes to think of itself as a democracy... This book is a brilliant essay on Thailand's legal history based on very detailed research into legislation and case law. In addition, it offers a complex, thoughtful and wide-ranging diagnosis of current discontents. Its rich historical and international perspective should make Thailand's democrats and Democrats pause to wonder where the country is heading." Chris Baker, Bangkok Post, November 2010

"David Streckfuss has done a great service to the study of lèse-majesté law and of its role in protecting the political and economic interests of the Thai monarchy. [Truth on Trial in Thailand] is a fine, exhaustively referenced study of the history of lèse-majesté law and of Thailand’s defamation laws more generally. It will be an authoritative reference book for a public now very much focused on the problem that lèse-majesté poses for Thai democracy." Patrick Jory, NM-TLC Reviewer