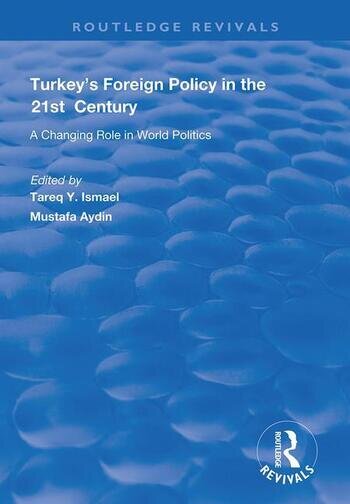 Turkey's Foreign Policy in the 21st Century: A Changing Role in World Politics

Title first published in 2003. In this insightful book, Tareq Y. Ismael and Mustafa Aydin explore Turkey's role within a globalizing world and, as a new century unfolds, examine a nation at the crossroads of both time and space within the international political order. Chapters consider Turkey's policy history, its prospects and policy issues and discuss them with positive alternatives outlined for Turkish policy-makers and the academics who examine them.

Contents: Turkish Foreign Policy in a New Century: Twenty years before, twenty years after: Turkish foreign policy at the threshold of the 21st century, Mustafa Aydin. Turkey and the West: Turkey and the United States, Sabri Sayari; Turkey and the European Union: a troubled relationship, Ozay Mehmet; The new European security architecture and Turkey, Seda Serdar; Perceptions and images in Turkish (Ottoman)-European relations, Nuri Yurdusev. Turkey and its Neighbors: Turkey and the Arab world in the new millennium, Dan Tschirgi; Turkey and the Russian federation: towards a mutual understanding?, Oktay F. Tanrisever; Between euphoria and Realpolitik: Turkey in Central Asia and the Caucasus, Mustafa Aydin; Cycles of tension and rapprochement: prospects for Turkey's relations with Greece, Tozun Bahcheli; Turkey's relations with Iran in the post-Cold War era, BÃ¼lent Aras; Syria, Turkey and the changing power configuration in the Middle East: an analysis of political, economic and regional differences, Erik L. Knudsen.

'As Turkey's importance in world affairs continues to grow, this is a welcome overview of Turkish foreign policy at the turn of the century. The essays, written by top experts in each field, very capably outline the state of Turkey's relations with its main foreign interlocutors. While helpfully outlining the most important issues of contention, however, they are also united by an overall conviction that better relations - particularly but not exclusively with Europe -- remain achievable. This relatively hopeful message will be of interest to scholars and policy-makers alike. Because the volume is organized region by region, moreover, it is particularly well suited for classroom use.' Associate Professor Malik Mufti, Tufts University, USA