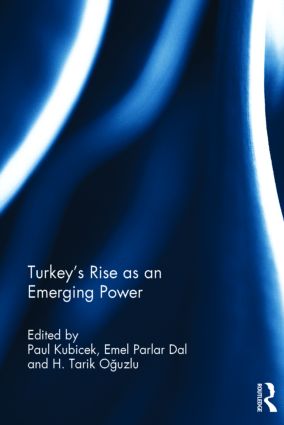 Turkey’s Rise as an Emerging Power

Turkey is emerging as an important actor in world politics, exerting growing influence both in its immediate region and beyond. This book aims to understand and explain this phenomenon, utilizing a variety of perspectives from international relations theory. One prominent issue is how Turkey, long embedded in the West via NATO and other European organizations, is growing more confident and is asserting more independent foreign policy positions. This is particularly marked in the Middle East, where some suggest Turkey is pursuing a "neo-Ottomanist" agenda. At times, this competes with and creates tensions with the West. However, a rising Turkey can also be a constructive phenomenon and complement the West. This book examines geopolitical, economic, and cultural dimensions of Turkey’s rise, pointing to both Turkish success and the limits of Turkish power and influence. It includes consideration of Turkey’s relations with NATO, the European Union, the Middle East, and BRIC countries.

This book was published as a special issue of Turkish Studies.

Arguably, this anthology on scientific, analytical level, as it may be interesting for professionals to delve into. It is well written, informative and insightful. Therefore, TURKEY's Rise as an Emerging Power rekommanderes for its vision and detailed examination of the distinctive and relevant issues in Turkey's current politiko-economic situation and geo-strategic position as an "emerging power".

1. Decoding Turkey’s Rise: An Introduction Profiling Turkey as a Rising Power and the Facilitating Factors at Play 2. Turkey: A Regional Power Facing a Changing International System 3. The Transformation of the Geopolitical Vision in Turkish Foreign Policy Categorizing Turkey as “Rising”: Alternative Conceptual Lenses and Theoretical Approaches 4. Beyond the Institutional Logics: International Level Systemic Analysis of EU–Turkish Relations 5. Assessing Turkey’s “Normative” Power in the Middle East and North Africa Region: New Dynamics and their Limitations 6. Turkey’s Peacebuilding in Somalia: The Limits of Humanitarian Diplomacy 7. Turkey and the BRICS: Can Turkey Join the BRICS? Making Sense of Turkey’s Rise With/Within the West 8. Making Sense of Turkey’s Rising Power Status: What Does Turkey’s Approach Within NATO Tell Us? 9. Defining Turkish Power: Turkey as a Rising Power Embedded in the Western International System

Emel Parlar Dal received her PhD from Paris 3 Sorbonne Nouvelle University in France and is Associate Professor of International Relations at Marmara University.

H. Tarik Oğuzlu is Professor of International Relations and Director of the Center for Social, Economic, and Political Research at Antalya International University.

Paul Kubicek is Professor of Political Science and Director of International Studies at Oakland University. He is editor of Turkish Studies.