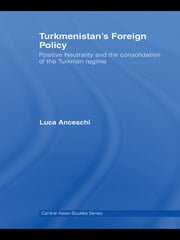 Turkmenistan’s Foreign Policy: Positive Neutrality and the consolidation of the Turkmen Regime

Turkmenistan, an independent nation since 1991, is a strategically important Central Asian state. This book covers the most significant period of the establishment of the Turkmen political regime. At the core of this book is the Doctrine of Positive Neutrality, which, from 1995 onwards, constituted the theoretical backbone for the foreign policy of post-Soviet Turkmenistan. The author analyses the reason and aim of the concept, its significance for and impact on the country’s domestic and foreign relations, its practical implementation and its transformation into a tool of strengthening of absolute personal authority. Furthermore, he establishes whether Positive Neutrality has to be seen as a ‘domestic-oriented’ foreign policy, which has been used by the Turkmen regime to reinforce its internal position. .
This is the first book-length and thorough analysis of Turkmenistan’s foreign policy. It furthers our understanding of Turkmenistan, and provides an informed background for the study of its foreign policy. It fills a void in the current literature, and it will constitute an essential reference for most scholars and researcher focusing on contemporary Central Asia, Russian foreign policy, Foreign Policy, International Relations and Comparative Politics.

Luca Anceschi is Research Associate at the Centre for Dialogue, La Trobe University, Australia. He is a graduate of the University of Naples ‘L’Orientale’ and of La Trobe University. His main research interests include the international politics of post-Soviet Central Asia and the Caucasus.

'In Turkmenistan's Foreign Policy, Luca Anceschi provides welcome insights into the development of this fascinating country. He draws a comprehensive picture of the evolution of the Turkmen regime from the emergence and consolidation of Saparmurat Niyazov's personal dictatorship to the post-Niyazov era of President Gurbanguly Berdymukhammedov, who, as Anceschi effectively points out, has so far provided more continuity than change in Turkmenistan's domestic and foreign-policy approaches despite his early promise to open up Turkmenistan's political system' - Survivial, December 2008

'Luca Anceschi’s book makes itself immediately valuable as a study that, without ignoring Niyazov’s cult of personality, looks beyond that regime’s eccentricities to provide an overview of Turkmenistan’s policy of positive neutrality' - VICTORIA CLEMENT, Europe-Asia Studies, Volume 61, 2009

"As a whole, the book is a revealing read...It is based on an admirably broad selection of first-hand sources...The chapter on economic foreign policy, in particular, is detailed and impressive".  - Michael Pye, Asian Affairs, July 2010

"Luca Anceschi provides a unique, scholarly analysis of the evolution of Turkmenistan’s foreign policy in the post-Soviet era, as the country struggled to establish itself as an independent state in a turbulent neighbourhood... a well-written, thorough analysis of Turkmenistan’s foreign policy, which provides a fascinating insight into the evolution of a unique international stance." - Tracey German, King’s College London, UK; International Affairs 86:6, 2010