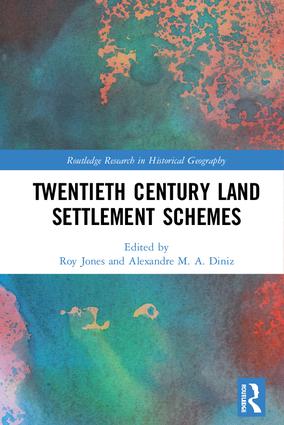 Land settlement schemes, sponsored by national governments and businesses, such as the Ford Corporation and the Hudson’s Bay Company, took place in locations as diverse as the Canadian Prairies, the Dutch polders, and the Amazonian rainforests. This novel contribution evaluates a diverse range of these initiatives.

By 1900, any land that remained available for agricultural settlement was often far from the settlers’ homes and located in challenging physical environments. Over the course of the twentieth century, governments, corporations and frequently desperate individuals sought out new places to settle across the globe from Alberta to Papua New Guinea. This book offers vivid reports of the difficulties faced by many of these settlers, including the experiences of East European Jewish refugees, New Zealand soldier settlers and urban families from Yorkshire.

This book considers how and why these settlement schemes succeeded, found other pathways to sustainability or succumbed to failure and even oblivion. In doing so, the book indicates pathways for the achievement of more economically, socially and environmentally sustainable forms of human settlement in marginal areas. This engaging collection will be of interest to individuals in the fields of historical geography, environmental history and development studies.

3. Policy Mobilities and Land Settlement Schemes: The Emergence of Homesteading in Western Australia

5. Soldier Settlement and the Expansion and Contraction of the Bush Frontier in New Zealand in the 1920s

8. Fordland and Belterra Yesterday and Today: A Regional Political Ecology Approach to Failed Projects in the Amazon

9. Physical and Social Engineering in the Dutch Polders: The Case of the Noordoostpolder Tialda Haartsen and Frans Thissen

10. The Elusive Dream of ‘Development’ on the Agricultural Land Settlement Schemes in Papua New Guinea

11. The Complexities of the Brazilian Amazon Frontier and its Most Recent Chapter: Soybean Expansion in Roraima

Roy Jones is an Emeritus Professor of Geography at Curtin University in Perth, Western Australia, where he has worked since 1970. He is an historical geographer with research interests in heritage, tourism and rural and regional change.

is a Professor in the Graduate Program in Geography at the Pontifical Catholic University of Minas Gerais, Brazil. His major research interests are in human geography, primarily on agricultural frontiers, crime geography and regional geography with an emphasis on the Brazilian Amazon.