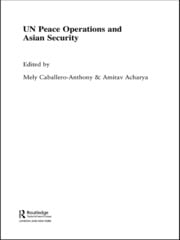 This is an unparallelled analysis of the state of the United Nations peace operations and their impact on Asian security.This new volume examines new strategies being adopted by the UN; including doctrinal shifts in peace operation, and assesses the division of labour between the UN, regional organisation and non-governmental organisations/actors.

Based on selected papers from mostly Asian scholars, the book offers regional perspectives from South, Southeast and Northeast Asia on the changing nature of UN Peace operations and analyses some of the core issues that are of critical relevance to regional security in Asia. In addition it reveals interesting new insights on the new players in the area of peace operations – i.e. China and Japan and considers their projected roles as defined by their respective security concepts. It also delves into issues of possible areas of concern caused by the new activism of these regional powers in peace operations. Finally, the book also revisits the significant lessons learnt from the UN experience in Cambodia and East Timor and examines their impact on future directions of peace operations.

This book was previously published as a special issue of the leading journal International Peacekeeping.

Mely Caballero-Anthony is Assistant Professor at the Institute of Defence and Strategic Studies, Singapore. Her research interests cover regionalism and regional security in Asia Pacific, human security and conflict resolution. She has written extensively on ASEAN, ARF, UN Peace Operations, NGOs in Southeast and on politics and security in Malaysia and the Philippines.  Her latest publications include: "Regionalisation of Peace in Asia", in Michael Pugh and WPS Sidhu, eds. The United Nations and Regional Security, (Lynne Rienner, 2003), Regional Security in Southeast Asia: Beyond the ASEAN Way (Singapore: Institute of Southeast Asian Studies, forthcoming 2005), and "Revisioning Human Security in Southeast Asia, Asian Perspective, 2004.

Amitav Acharya is Deputy Director and Head of Research at the Institute of Defence and Strategic Studies, Nanyang Technological University, Singapore, where he also holds a professorship. His recent publications include: Constructing a Security Community in Southeast Asia: ASEAN and the Problem of Regional Order (Routledge, 2001), and Regionalism and Multilateralism: Essays on Cooperative Security in the Asia Pacific, 2nd edition Eastern Universities Press, 2003), as well as an co-edited volume Asian Pacific Security Cooperation: Reconciling National Interest and Regional Order (M.E. Sharpe, 2004).

'A timely examination of how the contemporary changes and challenges for the UN in general, and for the UN peace operations in particular, affect Asian security.' - Contemporary Southeast Asia