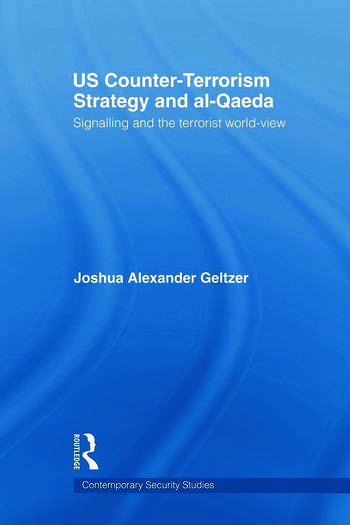 US Counter-Terrorism Strategy and al-Qaeda: Signalling and the Terrorist World-View

This book examines the communicative aspects and implications of US counter-terrorist policies towards al-Qaeda.

Recent US counter-terrorist strategy has been largely based upon projecting certain perceptions of America as an actor to those drawn to al-Qaeda, and this book investigates in what ways, and to what extent, US officials believed that the signals sent by what America did and said could influence the behaviour of the terrorist and would-be terrorist. The study then draws on a growing understanding of that audience to analyse how those drawn to al-Qaeda were and, indeed, still are likely to be influenced by the perceptions of America that Washington's policies generated. The study's central argument is that, given al-Qaeda's unconventional strategy and the particularities of the world-view characterising those drawn to the group, America's counter-terrorist signalling proved largely counter-productive to America's objective of undermining al-Qaeda's strategic narrative, instead serving in many ways to validate it.

Firstly, this book seeks to reveal the significant and largely unexplored role that signalling has played in US counter-terrorist policy towards al-Qaeda. Second, it tries to capture the objectives, strategy, tactics, ideology, and other defining features of the world-view characterising those drawn to al-Qaeda. Third, it strives to combine those two lines of inquiry by applying the al-Qaeda world-view to a critical analysis of the signals sent by US policies. Finally, the book aims to offer broad policy implications that demonstrate how an informed understanding of the world-view of those drawn to al-Qaeda can be employed to revise and refine American counter-terrorist signalling.

This book will be of much interest to students of US foreign policy and public diplomacy, counter-terrorism, strategy and international security.

Joshua Alexander Geltzer has a PhD in War Studies from Kings College London, and is currently a juris doctoral student at Yale Law School.

Joshua Alexander Geltzer has a PhD in War Studies from Kings College London, and is currently a juris doctoral student at Yale Law School.