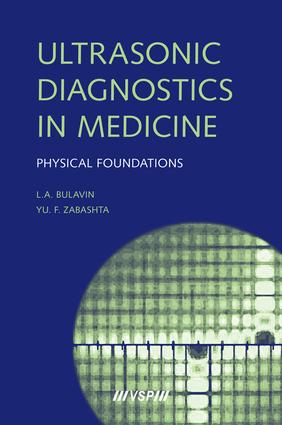 By Leonid A. Bulavin, Zabashta

To correctly diagnose a human organism with the help of acoustic waves is impossible without knowledge of the physics of acoustic waves interaction with the issues of the organism. This book is dedicated to the given problem. It consists of four sections, the first of which deals with physical models of the biological issues used in ultrasonic diagnostics. In the other sections the basic stages of ultrasonic diagnostics (sound radiation, sound scattering, depictions visualization) are studied. It is shown how different bodies and issues of a human organism scatter acoustic waves and how, using the scattered wave, one learns about what happens with some body or issue.

Very didactically organized, with ample attention for mathematical detail, which nowhere becomes so complicated that it obscures the physics behind it […] The first three chapter give a thorough but accessible description of the physics of ultrasonic pulse-echo imaging, while the fourth discusses the possible methods to apply these data for 2D, 3D or time-dependent imagery […] This book is a useful addition to the ultrasonic imaging literature, stepping into the - rather large - gap between more engineering-oriented texts and theoretical works. G. van Soest, PhD; Biomedical Engineering, Thorax center, Erasmus MC Rotterdam, the Netherlands