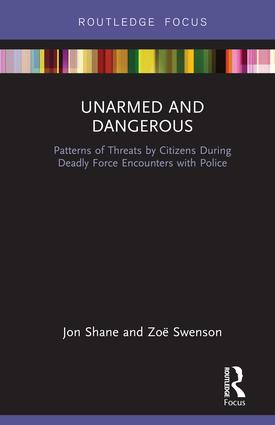 Patterns of Threats by Citizens During Deadly Force Encounters with Police, 1st Edition

There is tremendous controversy across the United States (and beyond) when a police officer uses deadly force against an unarmed citizen, but often the conversation is devoid of contextual details. These details matter greatly as a matter of law and organizational legitimacy. In this short book, authors Jon Shane and Zoë Swenson offer a comprehensive analysis of the first study to use publicly available data to reveal the context in which an officer used deadly force against an unarmed citizen. Although any police shooting, even a justified shooting, is not a desired outcome—often termed "lawful but awful" in policing circles—it is not necessarily a crime. The results of this study lend support to the notion that being unarmed does not mean "not dangerous," in some ways explaining why most police officers are not indicted when such a shooting occurs. The study’s findings show that when police officers used deadly force during an encounter with an unarmed citizen, the officer or a third person was facing imminent threat of death or serious injury in the vast majority of situations. Moreover, when police officers used force, their actions were almost always consistent with the accepted legal and policy principles that govern law enforcement in the overwhelming proportion of encounters (as measured by indictments).

Noting the dearth of official data on the context of police shooting fatalities, Shane and Swenson call for the U.S. government to compile comprehensive data so researchers and practitioners can learn from deadly force encounters and improve practices. They further recommend that future research on police shootings should examine the patterns and micro-interactions between the officer, citizen, and environment in relation to the prevailing law. The unique data and analysis in this book will inform discussions of police use of force for researchers, policymakers, and students involved in criminal justice, public policy, and policing.

Chapter 2 - Focal Concerns of Police Officers and the Legal Framework

Jon Shane is an Associate Professor in the Department of Law, Police Science, and Criminal Justice Administration at John Jay College of Criminal Justice. He retired from the Newark Police Department after 20 years at the rank of captain. Professor Shane has published in leading criminal justice and policing journals, including Crime Science, Journal of Criminal Justice, Justice Quarterly, Policing: An International Journal of Strategies and Management, and Police Practice and Research. He is the author of What Every Chief Executive Should Know: Using Data to Measure Police Performance (Looseleaf Law), Learning from Error: A Case Study in Organizational Accident Theory (Springer), and Confidential Informants: A Closer Look at Police Policy (Springer). His research focuses on issues in police policy and practice, especially use of force, performance management and issues aimed at management and supervision, social disorganization theory, ecology and crime, violent crime, situational crime prevention, and problem-oriented policing.

Zoë Swenson is an investigator with the New York City Department of Investigation, where she investigates corruption, including financial fraud, assault, contraband smuggling, and sex crimes, relating to the New York City Department of Correction. She is currently attending the Department of Investigation’s Peace Officer Training Academy. Swenson holds a Master of Arts in criminal justice from John Jay College of Criminal Justice, where she specialized in criminology and deviance. Her research interests are police policy and practice issues, use of force, and situational crime prevention. She is published in leading criminal justice journals including Journal of Criminal Justice, where she explored the prevalence and patterns of fatal police shootings by U.S. police between 2015 and 2016.