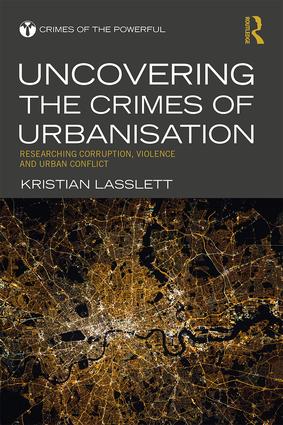 Uncovering the Crimes of Urbanisation

From the social cleansing of cities through to indigenous land struggles at the frontline of extraction megaprojects, planetary urbanisation is a contested process that is radically shaping social life and the sustainability of human civilisation. In this pioneering intervention, it is maintained that this turbulent planetary process is also a potent space for state–corporate criminality. Market manipulation, fraud, corruption, violence and human rights abuses have become critical spokes in the way space is being transformed to benefit speculative interests. This book not only offers investigative data that documents in detail the intricate ways state and corporate actors collude to profit from the built environment; it also establishes the tools for building a research agenda that can interrogate the crimes of urbanisation on a comparative, longitudinal basis.

The author sets out an investigative methodology which can be appropriated to conduct probing research into the hidden schemas and forms of collusion that buttress state–corporate criminality in the urban sphere. Coupled to this, a theoretical framework is developed for thinking about the networks, processes and mechanisms at the heart of property market manipulation, and the broader social relationships that sustain and reward illicit speculative activity. This book concludes that researchers and civil society have a critical role to play in challenging a historical form of planetary urbanisation, marked by endemic state–corporate criminality, that poses significant threats to the sustainability of lived communities and the rich biospheres that they depend upon.

This book will be of interest to criminologists, sociologists, human geographers, political scientists and those engaged with development studies, as well as civil society organisations and urban researchers.

‘Lasslett puts the biggest crime of all – the diverse state–corporate criminality which threatens lived communities, the rich biospheres they depend upon and the very existence of our planet – under the most critical social scientific scrutiny. This is a magisterial work, gleaned from experience across the globe and which speaks to each individual upon it. It is data-rich, fecund with conceptual and theoretical sophistication, methodologically inspiring and one which frightens and angers – but, ultimately, which bequeaths real grounds for hope and tools of resistance’.

‘You are holding a very rare book in your hands. This is empirically rich, methodologically innovative and theoretically ground-breaking. Although most researchers struggle to achieve one of those, this book is hugely impressive for its contribution on all three counts. This is a major contribution to Marxist understandings of "crime" that is meticulously researched. It shows that ignoring formal rules and norms of conduct is not merely an anti-social practice, but is part of the creative destruction inherent in urban development. In uncovering how corruption and extortion ruin the lives of ordinary people in Papua New Guinea, Kristian Lasslett makes an utterly convincing case. Here, crime is not merely a "bad" thing that "bad" people do. Rather, the crimes of urbanisation constitute a cold and calculated means of achieving class domination’.

'Kristian Lasslett’s brilliant interdisciplinary study demonstrates convincingly how the urbanisation necessary to globalised capitalism is inescapably prone to the predations of state–corporate crime. The consequent human and environmental harm is here laid bare, most effectively with telling instances from Papua New Guinea that clearly show the global processes under examination. This is big-picture stuff: analytically insightful, rigorous and nuanced, methodologically innovative and empirically meticulous’.

Introduction: The darkness of neon lights: Introducing the crimes of urbanisation

3. The crimes of the powerful and urbanisation: An investigative framework

5. The crimes of urbanisation and megaprojects: Investigating a ‘tourism city’

6. A land-grab in the world’s ‘tuna capital’

8. Crimes of urbanisation research and social resistance: Conclusions and the task ahead

Kristian Lasslett is Professor of Criminology at the University of Ulster, and sits on the Executive Board of the International State Crime Initiative. He is joint Editor-in-Chief of State Crime, a leading international peer reviewed journal, and Editor of The State Testimony Project, the first online casebook for state crime studies.