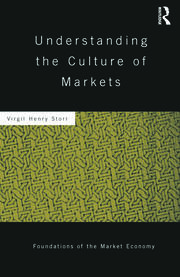 Although most social scientists recognize that culture shapes economic behavior and outcomes, the majority of economists are not very interested in culture. Understanding the Culture of Markets begins with a discussion of the reasons why economists are reluctant to incorporate culture into economic analysis. It then goes on to describe how culture shapes economic life, and critiques those few efforts by economists to discuss the relationship between culture and markets. Finally, building on the work of Max Weber, it outlines and defends an approach to understanding the culture of markets.

In order to understand real world markets, economists must pay attention to how culture shapes economic activity. If culture does indeed color economic life, economists cannot really avoid culture. Instead, the choice that they face is not whether or not to incorporate culture into their analysis but whether to employ culture implicitly or explicitly. Ignoring culture may be possible but avoiding culture is impossible. Understanding the Culture of Markets will appeal to economists interested in how culture impacts economic life, in addition to economic anthropologists and economic sociologists. It should be useful in graduate and undergraduate courses in all of those fields.

Preface  1. Introduction  2. Economists Should Study Culture  3. But, Economists Often Misunderstand the Relationship Between Culture and Markets  4. Economists Ought to Be Looking at the Spirits Which Animate Markets  5. This Does Not Mean That Economists Have to Abandon Economics Epilogue

‘Storr issues a challenge to the entire discipline of economics in this deep and innovative study. It should be required reading in every undergraduate class on markets and economic theory. A brave and spirited work that carves out new intellectual territory for economics. This book opens a crucially important conversation between economists and other social scientists, asking fundamental questions about what determines behavior in markets. Storr is definitely pushing the boundaries of economics, opening up the most fundamental issues in the theory of markets. This work will be welcomed by social scientists in many disciplines, and it should be read by any serious student of markets.’ — Richard Wilk, Provost Professor of Anthropology, Indiana University, USA

‘Storr's beautifully written book puts forward a theory of the ‘animating spirit’ in an economy, in the style of Max Weber's ethic — without the Protestantism. He replies to Samuelsonian economists who want to reduce everything to Capital and to Austrian economists who are not willing to take the next step into culture that their theories demand. In short, he and a handful of others, may their tribe increase, are initiating a 'humanomics,' that is, an economics with people instead of sociopaths at its center.’ —

‘Economists have all too often either ignored culture completely, or failed to do justice to it by assimilating it to some other phenomenon - such as capital - that provides a poor model for understanding its true nature and significance. Virgil Storr is different. He has thought hard about how to conceptualize culture, about the relationship between culture and economic activity, and about how an appreciation of culture should affect the way that economists carry out applied work. This careful, insightful, and persuasive book is the outcome of his reflections. Economists who want a more sophisticated way of thinking not only about culture but also, given culture's impact on economic activity, about markets, will benefit greatly from reading it. Social scientists from other disciplines who have previously despaired of finding a culturally literate economist will also find much to ponder and value in this fine work of scholarship.’ —

‘In one of the most controversial works in social science, Max Weber argued that without taking ‘the spirit of capitalism’ into account, you cannot understand the modern economy. More than a century later, Virgil Storr argues that without taking ‘the spirits that animate markets’ into account, you cannot understand the modern economy. Was Weber right or wrong; is Storr right or wrong? Different readers will no doubt give different answers. But all will agree that Storr raises questions that are absolutely essential to get a better grip on the modern economy.’ —

‘In Understanding the Culture of Markets Virgil Storr makes a major contribution to the under-explored intersection between cultural and economic processes. The customary perspective the economics discipline brings to cultural analysis is either to collapse nuanced cultural processes into a rational choice model of human decision making or to cast culture in the role of economic spoiler—as a set of constraints that stands in the way of productive life. In Storr’s hands, culture receives the nuanced treatment it deserves as he explores the ways in which culture shapes and undergirds all of productive life. In short, Storr delivers on his promise to offer an economics of meaning.’ —

‘The reason some countries prosper while others languish in abject poverty is ultimately a function of the institutions of governance that are operating within each country. Peaceful and prosperous countries have institutions that curb public and private predation; poor, sick and violent countries have institutions that leave public and private predation unchecked. This observation is in many ways as old as economics as a discipline, and certainly was a central message of Adam Smith's description about the difference between barbarism and opulence. But the puzzle of how peoples are able to move from one set of institutions to another is not as obvious. Smith's recipe of ‘peace, easy taxes, and a tolerable administration of justice’ must be supplemented by a deeper examination of the cultural preconditions that allow such an institutional configuration to take root in any society. Those cultural preconditions become evident to us through the stories societies tell about themselves, and the tacit presuppositions that underlie social intercourse in specific social contexts. Political economy, in other words, must ultimately move from the pure theory of price and the institutional analysis of development to an understanding of the culture of markets if an adequate explanation of the wealth and poverty of nations is to emerge. Enter Virgil Storr's concise, readable, learned, and penetrating discussion of the beliefs, norms, mores, attitudes, and 'spirits' that make human societies tick. Understanding the Culture of Markets is required reading for any student of society and the doings of human action regardless of disciplinary background and ideological disposition. Storr provides his reader with not only a primer on cultural economy, but also an examination of the methodological and analytical adjustments required by economics if the discipline is to realize its full potential as a science of human action.’ —