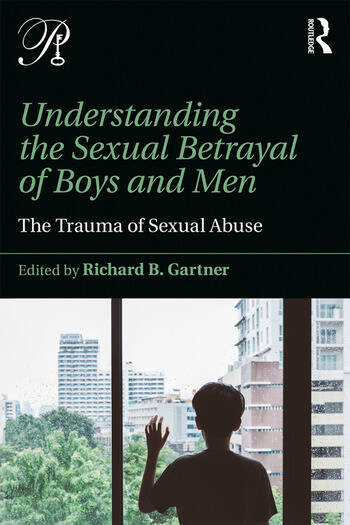 Understanding the Sexual Betrayal of Boys and Men: The Trauma of Sexual Abuse

Understanding the Sexual Betrayal of Boys and Men: The Trauma of Sexual Abuse is an indispensable go-to book for understanding male sexual victimization. It has become increasingly clear since the 1980s that men and boys, like women and girls, are sexually abused and assaulted in alarming numbers. Yet there have been few resources available to victims, their loved ones, or those trying to help them.

Richard B. Gartner was in the vanguard of clinicians treating male sexual victimization and has written extensively about it, initially in professional papers, then in his landmark 1999 book for clinicians Betrayed as Boys: Psychodynamic Treatment of Sexually Abused Men, continuing with his 2005 work Beyond Betrayal: Taking Charge of Your Life after Boyhood Sexual Abuse. He has been a tireless teacher, clinician, and advocate for male victims of sexual abuse in the classroom, the lecture hall, and of course the consulting room as well as in newspaper, television, radio, and online interviews.

Dr. Gartner has gathered together expert colleagues from the trauma, psychoanalytic, medical, and survivor treatment fields. Together, they have created a comprehensive guide to what was once thought to be a rarity but now is clearly an all-too-common occurrence. Understanding the Sexual Betrayal of Boys and Men looks at the realities of male sexual victimization, guiding clinicians and lay people alike to understand the complexities of the devastation it causes in victimized boys and men. It considers topics as diverse as:

Understanding the Sexual Betrayal of Boys and Men

is required reading for anyone working with male victims of sexual abuse and assault at any level –  psychotherapists, rape counselors, attorneys, journalists, guidance counselors, physicians, clergy, graduate students, and lawmakers –  and helpful to lay people interested in this often-unrecognized problem.

Richard B. Gartner is Training and Supervising Analyst, Faculty, and Founding Director of the Sexual Abuse Service at the William Alanson White Psychoanalytic Institute; author of Betrayed as Boys: Psychodynamic Treatment of Sexually Abused Men (1999) and Beyond Betrayal: Taking Charge of Your Life after Boyhood Sexual Abuse (2005); and editor of Trauma and Countertrauma, Resilience and Counterresilience: Insights from Psychoanalysts and Trauma Experts (2017) and Memories of Sexual Betrayal: Truth, Fantasy, Repression, and Dissociation (1997) as well as the companion volume to this one, Healing Sexually Betrayed Men and Boys: Treatment for Sexual Abuse, Assault, and Trauma. Co-Founder and Past President of MaleSurvivor.org, he is a pioneer in treating sexually abused men and is quoted widely in the media on the subject.

"Men’s lives are complicated, despite stereotypes to the contrary. Recognizing and making sense of the challenges faced by male survivors of sexual abuse requires even more complex thinking. We’re very fortunate that Richard Gartner and a who’s who of experts have shared their insights – and the voices of many men they’ve worked with – in order to help professionals better understand and serve these men. This book is a must-read for therapists, lawyers, clergy, and anyone who spends time with male survivors."
-Andrew P. Smiler, Ph.D., Board President, MaleSurvivor: National Organization against Male Sexual Victimization; Past President, Society for the Psychological Study of Men and Masculinity, Division 51, American Psychological Association; author, Dating and Sex: A Guide for the 21st Century Teen Boy.

"Understanding the Sexual Betrayal of Boys and Men: The Trauma of Sexual Abuse is a chorus of voices, coming from a range of perspectives, on the oft-misunderstood topic of men who have been sexually abused. Covering neurobiological, medical, psychological, empirical, diversity and first person perspectives, it offers practical and evidence-based information that will be a lifesaver for men who have survived abuse. This book is a "must read" for every therapist working with such men."
-Ronald F. Levant, Ed.D., M.B.A., A.B.P.P., Professor of Psychology, University of Akron; Former President, American Psychological Association; co-editor, The Psychology of Men and Masculinities, A New Psychology of Men, and New Psychotherapy for Men.

"Understanding the Sexual Betrayal of Boys and Men is a treasure trove of illuminating essays on the devastating effects of childhood sexual abuse on boys, and on the men they become. Approximately one in six men in our culture have been sexually abused as children. Authors from a variety of fields of expertise describe the effects of childhood sexual abuse on brain chemistry and structure, interpersonal distrust, distorted and fearful feelings about the body, issues of gender and sexual identity confusion on boys, and more. All of this is in the context of straitjacketing stereotypes that instruct men not to be vulnerable. Also exposed is the surrounding dark side our culture that has implicitly allowed abuse of boys, whether in the church, in sports, or as aspects of high-ranking privileged men’s customs. This book is a must-read for anyone interested in the lives of men.

The editor, Richard Gartner, PhD, was the first major mental health expert to document, and describe in detail, the high prevalence of sexual abuse of boys and its effects on them. His specialized treatment approaches are described in earlier books: Betrayed as Boys: Psychodynamic Treatment of Men Abused as Boys and Beyond Betrayal: Taking Charge of Your Life after Boyhood Sexual Abuse."
-Elizabeth Howell, Ph.D., author, Understanding and Treating Dissociative Identity Disorder: A Relational Approach and The Dissociative Mind; co-editor, The Dissociative Mind in Psychoanalysis: Understanding and Working with Trauma.

"Understanding the Sexual Betrayal of Boys and Men: The Trauma of Sexual Abuse

is an essential and incisive compendium. Integrating multiple perspectives, this book addresses the full implications of male sexual abuse: its emotional, physiological, and legal aftermath. The contributing authors achieve this with depth, wisdom, and compassion. We must thank Gartner for continuing to awaken us to this trauma, and for releasing these men from the shadows."
-Sue Grand, Ph.D., author, The Reproduction of Evil: A Clinical and Cultural Perspective and The Hero in the Mirror: From Fear to Fortitude.

"Public and professional recognition of male sexual abuse did not come into view until the 1980s. Dr. Gartner changed that and continues to do so. He has written a number of books on male sexual abuse and now, by means of this book and its cohort volume (Healing Sexually Betrayed Men and Boys: Treatment for Sexual abuse, Assault, and Trauma), we have a much better understanding of male sexual victimization.

Gartner does a masterful job of gathering mental health professionals of various backgrounds, plus academics, survivors, attorneys, and a physician to contribute to this edited book. The chapters provide clinical examples and personal vignettes. Together, these give a wide-ranging picture of male sexual victimization. A broad range of topics is considered: historical, biological, medical, institutional and cultural effects and issues related to exploitation and sexuality (including trafficking in adolescent boys), sexual interests and compulsions, and sexual dysfunctions.

Understanding the Sexual Betrayal of Boys and Men

will impact how male sexual victimization is socially and personally understood and clinically and legally addressed. This book is a compulsory read for all those who want to understand the sexual victimization of boys and men."
-Judith L. Alpert, Ph.D., Professor of Applied Psychology and Former Co-Director, Trauma and Violence Transdisciplinary Studies Program, New York University; Professor and Consultant, New York University Postdoctoral Program in Psychotherapy and Psychoanalysis.

"Gartner – who works at the William Alanson White Institute, and therefore belongs firmly to the interpersonal-cultural schoool of psychoanalysis, in which I myself trained many years ago, which explains my sympathy for Gartner - coordinates the contributions of many authors on the different and intertwined facets of the problem, including many reports of the survivors themselves. Some of the authors are themselves survivors. "
-Marco Bacciagaluppi, M.D., The American Journal of Psychoanalysis