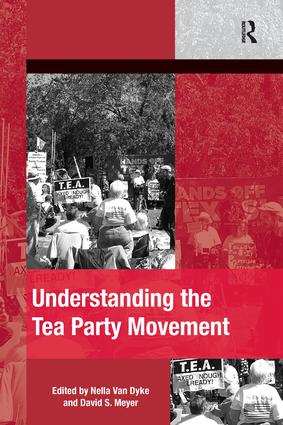 Hailing themselves as heirs to the American Revolution, the Tea Party movement staged tax day protests in over 750 US cities in April 2009, quickly establishing a large and volatile social movement. Tea Partiers protested at town hall meetings about health care across the country in August, leading to a large national demonstration in Washington on September 12, 2009. The movement spurred the formation (or redefinition) of several national organizations and many more local groups, and emerged as a strong force within the Republican Party. Self-described Tea Party candidates won victories in the November 2010 elections. Even as activists demonstrated their strength and entered government, the future of the movement's influence, and even its ultimate goals, are very much in doubt. In 2012, Barack Obama, the movement’s prime target, decisively won re-election, Congressional Republicans were unable to govern, and the Republican Party publicly wrestled with how to manage the insurgency within. Although there is a long history of conservative movements in America, the library of social movement studies leans heavily to the left. The Tea Party movement, its sudden emergence and its uncertain fate, provides a challenge to mainstream American politics. It also challenges scholars of social movements to reconcile this new movement with existing knowledge about social movements in America. Understanding the Tea Party Movement addresses these challenges by explaining why and how the movement emerged when it did, how it relates to earlier eruptions of conservative populism, and by raising critical questions about the movement's ultimate fate.

’With the rise and now potential decline of the Tea Party movement, we have been sorely in need of a volume explaining this pivotal early 21st century conservative mobilization. With Van Dyke and Meyer’s edited volume, containing chapters written by scholars foremost in their field, we now have the definitive source on this fascinating and important social movement.’ Holly McCammon, Vanderbilt University, USA 'When the Tea Party movement erupted, it challenged mainstream politics and scholars: where did the Tea Party’s resources come from? Who were its supporters? What defined their goals and identities? In this volume, some of the most insightful scholars of social movements today provide convincing answers to these questions. Better than any other, this volume shows why the Tea Party emerged and how it has reshaped the political landscape.’ Jack A. Goldstone, George Mason University, USA

Published in conjunction with Mobilization: An International Quarterly, the premier research journal in the field contentious politics, this series publishes research in social movements, protest and strategies of resistance. This is an expansive area of study that includes research in sociology and political science, as well as from communications, geography, social psychology, and anthropology. The series welcomes proposals on a range of topics and theoretical perspectives, including movement strategies and organization, new communication technologies, protest in the global South, resistance in different state systems, cultural movements, identity politics, and more.