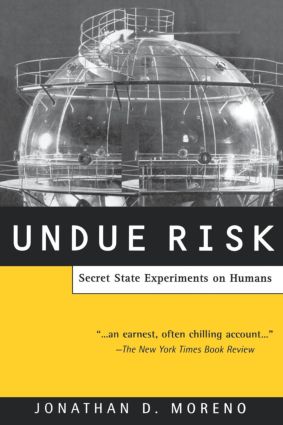 From the courtrooms of Nuremberg to the battlefields of the Gulf War, Undue Risk exposes a variety of government policies and specific cases, includingplutonium injections to unwilling hospital patients, and even the attempted recruitment of Nazi medical scientists bythe U.S. government after World War II.

"An earnest, often chilling account of the experiments with chemical and biological agents as well as radiation. Undue Risk strongly supports [Moreno's] contention that the rights of human subjects deserve to be held paramount over any needs of national security." -- Daniel J. Kevels, The New York Times Book Review

"A thoughtful look into the unfortunate penchant of 20th-century governments to test deadly weapons on their own citizens." -- Kirkus Reviews

"Between 1949 and 1969, the U.S. Army conducted over 200 "field tests" as part of its biological warfare research program, releasing infectious bacterial agents in cities across the U.S. without informing residents of the exposed areas, Moreno reveals in this chilling, meticulously documented casebook." -- Publisher's Weekly

"Although each chapter deals with a different set of experiments, the author weaves these studies together into a seamless account that is well-organized and fascinating to read. One appealing facet of the book is the many interesting tangents it takes. Moreno's book is an effective means to stir debate on the ethical issues involved in experimentation involving human subjects." -- The Left Atrium

Jonathan D. Moreno is former senior staff member of President Clinton's Advisory Committee on Human Radiation Experiments, is Kornfeld Professor of Biomedical Ethics and Director of the Center for Biomedical Ethics at the University of Virginia. He is also Senior Research Fellow at the Kennedy Institute of Ethics at Georgetown University and has been a bioethics columnist for abcnews.com. Among his previous books are Deciding Together: Bioethics and Moral Consensus (1995), Ethics in Clinical Practice (1999), and Arguing Euthanasia (1995).