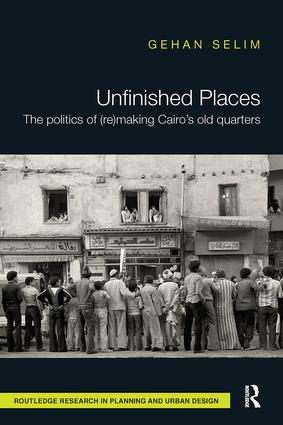 The Emerging Politics of (Re) making Cairo's Old Quarters examines postcolonial planning practices that aimed to modernise Cairo’s urban spaces. The author examines the expanding field of postcolonial urbanism by linking the state’s political ideologies and systems of governance with methods of spatial representations that aimed to transform the urban realm in Cairo. Adopting an interdisciplinary approach, the study draws on planning, history and politics to develop a distinctive account of postcolonial planning in Cairo following Egypt’s 1952 revolution. The book widely connects the ideological role of a different type of politicised urbanism practised during the days of Nasser, Sadat and Mubarak and the overarching policies, institutions and attitudes involved in the visions for (re) building a new nation in Egypt.

By examining the notion of remaking urban spaces, the study interprets the ambitions and powers of state policies for improving the spatial qualities of Cairo’s old districts since the early 20th century. These acts are situated in their spatial, political and historical contexts of Cairo’s heterogeneous old quarters and urban spaces particularly the remaking of one of the city’s older quarts named Bulaq Abul Ela established during the Ottoman rule in the thirteenth century. It therefore writes, in a chronological sequence, a narrative through time and space connecting various layers of historical and contemporary political phases for remaking Bulaq. The endeavor is to explain this process from a spatial perspective in terms of the implications and consequences not only on places, but also on the people’s everyday practices. By deeply investigating the problems and consequences; the strengths and weaknesses; and the state’s reliability to achieve the remaking objectives, the book reveals evidence that shifting forms of governance had anchored planning practices into a narrow path of creativity and responsive planning.

'In Unfinished Places: The Politics of (Re) making Cairo’s Old Quarters, Gehan Selim presents to us a thorough study of Bulaq, an old neighborhood in the City. In it, she employs the different types of planning produced under the Nasser, Sadat and Mubarak regimes to illustrate how the shifts in their forms of governance resulted in different forms of urbanism.' - Nezar AlSayyad, Professor of Architecture and Planning, University of California, Berkeley, USA

'Unfinished Places is a commanding discourse on urbanism and politics in one of the most important cities in the world. Representing a distinct yet elegiac interdisciplinary approach, Selim’s emphasis on the past and its impact on our future is a timely tour de force.' - Beverley Milton-Edwards, Convenor for MA Violence, Terrorism and Security, Queens University of Belfast, Northern Ireland

'Cairo's long history is one of extraordinary richness, yet the experience of urban life for its citizens is largely hidden. Recent events have illustrated how the city's public realm has the potential to reflect the authentic voice of its population in a frame created by its elite. Unfinished Places is a detailed study of the Bulaq district of Cairo which subverts many of the assumptions about Arab cities and provides an exemplary template through which the exploration of world urbanism might be pursued in the future.' - Eamonn Canniffe, Principal Lecturer, Manchester School of Art, UK

Gehan Selim is an architect and lecturer at Queen's University Belfast, UK. She holds a PhD in Architecture from the University of Sheffield, UK, and is a fellow of the Senator George J. Mitchell Institute for Global Peace, Security and Justice, UK.

The Routledge Research in Planning and Urban Design series provides the reader with the latest scholarship in the field of planning and beyond. The series publishes international research covering spatial planning, regional planning, planning history, planning theory, communities, impact assessment, transport, sustainability and urban design. Building on Routledge’s history of academic rigor and cutting edge research, the series will contribute to the rapidly expanding literature in all areas of planning and urban design.