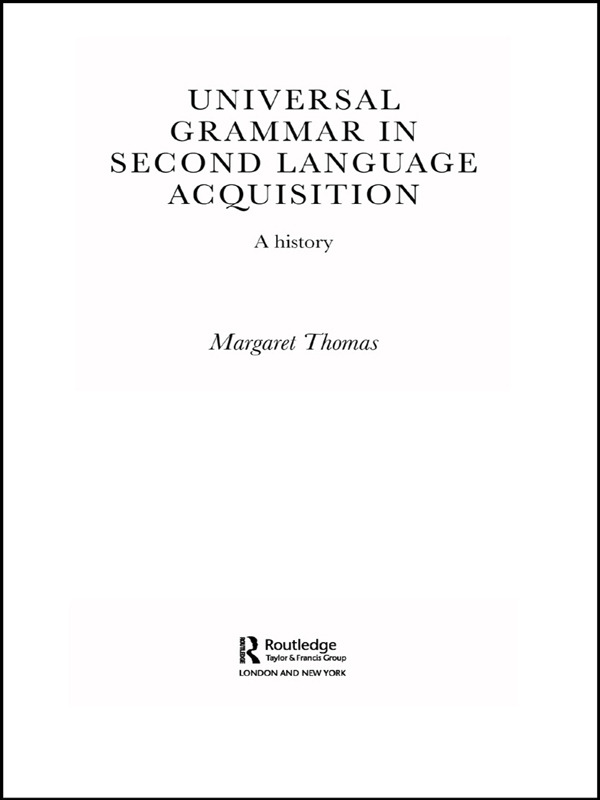 From the ancient Mediterranean world to the present day, our conceptions of what is universal in language have interacted with our experiences of language learning. This book tells two stories: the story of how scholars in the west have conceived of the fact that human languages share important properties despite their obvious differences, and the story of how westerners have understood the nature of second or foreign language learning.

In narrating these two stories, the author argues that modern second language acquisition theory needs to reassess what counts as its own past. The book addresses Greek contributions to the prehistory of universal grammar, Roman bilingualism, the emergence of the first foreign language grammars in the early Middle Ages, and the Medieval speculative grammarians efforts to define the essentials of human language. The author shows how after the renaissance expanded people's awareness of language differences, scholars returned to the questions of universals in the context of second language learning, including in the 1660 Port-Royal grammar which Chomsky notoriously celebrated in Cartesian Linguistics. The book then looks at how Post-Saussurean European linguistics and American structuralism up to modern generative grammar have each differently conceived of universals and language learning.

Universal Grammar in Second Language Acquisition is a remarkable contribution to the history of linguistics and will be essential reading for students and scholars of linguistics, specialists in second language acquisition and language teacher-educators.

'This book would clearly be at home on the reading list of courses in the history of linguistics. In addition, it would be a thought-provoking addition to courses on L2 acquisition research. It is well-written and painstakingly referenced.' - Linguist List

1. Introduction 2. Ancient Greece and Rome 3. Languages and Language Learning from Late Antiquity to the Carolingian Renaissance 4. The Middle Ages 5. From Discovery of the Particular to Seventeenth-Century Universal Languages 6. General Grammer Through the Nineteenth Century 7. Conceptualization of Universal Grammer and Second Language Learning in the Twentieth Century 8. Afterword

Margaret Thomas is Associate Professor in the Program in Linguistics at Boston College. She is the author of Knowledge of Reflexives in a Second Language (1993), and has published articles in Language, Studies in Second Language Acquisition, Second Language Research, The Linguistic Review and Historiographia Linguistica

Routledge Studies in the History of Linguistics