Urban Governance
Britain and Beyond Since 1750 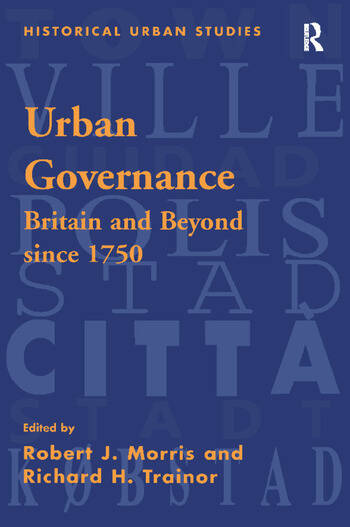 Urban Governance: Britain and Beyond Since 1750

This is a coherent and integrated set of essays around the theme of governance addressing a wide range of questions on the organisation and legitimation of authority. At the heart of the book is a set of topics which have long attracted the attention of urbanists and urban historians all over the world: the growth and reform of urban local government, local-centre relationships, public health and pollution, local government finance, the nature of local social élites and of participation in local government. Approaching these topics through the concept of governance not only raises a series of new questions but also extends the scope of enquiry for the historian seeking to understand towns and cities all over the world in a period of rapid change. Questions of governance must be central to a variety of enquiries into the nature of the urban place. There are questions about the setting of agendas, about when a localised or neighbourhood issue becomes a big city or even national political issue, about what makes a ’problem’. Public health and related matters form a central part of the ’issues’ especially for the British; in North America fire and the development of urban real estate have dominated; in India the security of the colonial government had a prominent place. The historical dynamic of these essays follows the change from the chartered governments of the seventeenth and eighteenth centuries towards the representative regimes of the nineteenth and twentieth. However, such historical change is not regarded as inevitable, and the effects of bureaucratic growth, regulatory regimes, the legitimating role of rational and scientific knowledge as well as the innovatory use of ritual and space are all dealt with at length.

’Urban history is...undergoing something of a renaissance and the excellent collection of papers in Urban Governance should help with the refocusing of the subject in Britain and has massive implications for the study of the subject elsewhere...a seminal collection of papers that all teachers should read.’ Teaching History ’Very intelligent editing and ordering and the inclusion of a number of thematic papers has helped to provide considerable coherence....This is a good book, a worthy contribution to a worthy new series from Ashgate...(it) would undoubtedly command a prominent place on any reading list addressing the Victorian city or the nature of urban power in the nineteenth century.’ Reviews in History ’...this book represents an important contribution to our understanding of urban governance in Britain. It gives substance to historical processes of change and represents the type of reading that should be a starting-point for current researchers engaging with the processes and practices of local governance...recommended for urban researchers.’ Urban Studies