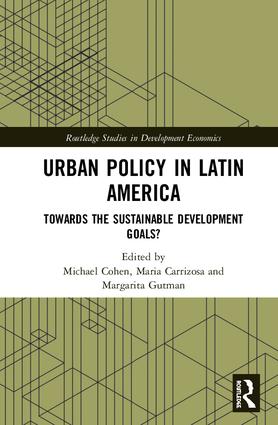 This book evaluates the impact of 20 years of urban policies in six Latin American countries: Argentina, Brazil, Chile, Colombia, Ecuador and Mexico. It argues that evaluating the fulfillment of past commitments is essential for framing and meeting the new commitments that were taken in Habitat III over the next 20 years.

Taken as a whole, the book provides a critical assessment of the economic, social and environmental consequences of urban interventions during Habitat II. The country-level chapters have been written by recognized experts in urban issues, with first-hand knowledge of the Habitat process, and deep familiarity with the problems, statistics, actors and political contexts of their nations. The latter part of the volume considers wider topics such as the Habitat Commitment Index, the New Urban Agenda and the regional and global-scale lessons that can be extracted from this group of countries.

Urban Policy in Latin America will be of interest to advanced students, researchers and policymakers across development economics, urban studies and Latin American studies.

María Carrizosa is Coordinator of the Observatory of Latin America and PhD candidate in Public and Urban Policy at The New School. She teaches graduate and undergraduate courses in public and private universities in New York. She is an architect and philosopher, MS in International Affairs and has postgraduate studies in Geography. Her doctoral research analyzes labor informality from a spatial lens.

has a Ph.D. in Architecture from University of Buenos Aires (UBA). She is a Professor of Urban Studies and International Affairs and co-director of the Observatory on Latin American (OLA) at The New School in New York. She is Profesora Consulta and member of the Doctoral Commission at the School of Architecture, Design and Urbanism, UBA.