Urban Restructuring, Power and Capitalism in the Tourist City
Contested Terrains of Marrakesh 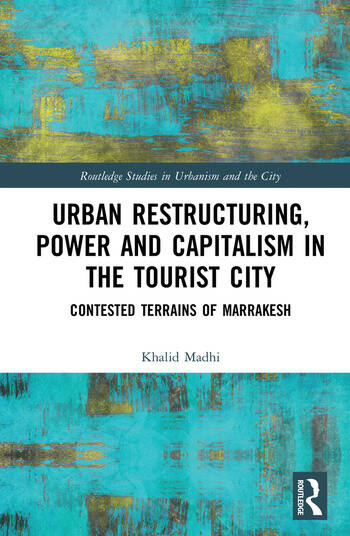 Urban Restructuring, Power and Capitalism in the Tourist City: Contested Terrains of Marrakesh

The book focuses on the processes of urban restructuring, power relations and the political economy of touristic authenticity.

Through an in-depth analysis of Marrakesh, Morroco, the book proposes a comprehensive analytic framework. It highlights the issues of (post)coloniality, ideology, heritage-commodification, subjectivity and counter-conduct in the shadow of global capitalism. It explores how power relations and political ecomomy have shaped the city of Marrakesh over the past few decades, formulating new subjectivities. It reveals how urban policy’s sole purpose is to boost tourism in the city, bringing into question the long-term resilience and success of tourism as an economic activity and a policy choice. This book considers how the well-being of city residents is submitted to such policies, conforming to certain forms of appropriation – of land, culture and memory.

The example of Morocco helps us understand a phenomenon affecting many other cities internationally. This book will be valuable to academics and practitioners across disciplines, including geography, political science, urban planning and architecture.

earned his Ph.D. in political science from the University of Illinois at Chicago, where he taught courses on gender and women’s studies, Middle Eastern politics and urban studies. Prior to that, Khalid served as a teaching fellow at the Cadi Ayyad University in Marrakesh, Morocco, where he taught graduate seminars on urban and local politics. His research interests include comparative urban politics and urban marginalities in the Global South, conceptions of power and the status of the “Other” in contemporary determinations of politics.

"Urban Restructuring, Power and Capitalism in the Tourist City: Contested Terrains of Marrakesh" is an important addition to both the literatures on tourism and on Islamic cities. It sheds light on the processes of branding Marrakesh which made it into a world destination. The book provides a serious assessment of the roles played by the state, the NGOs and the private sector in the heritage industry. It raises interesting questions about the politics of patrimony and the role of urban governance which have significance beyond Morocco.

This is a brilliant analysis of the conflicting agendas through which a city becomes a global commodity. The production of Marrakech as a major touristic destination rests upon an assemblage of conflicting interventions, technologies, knowledges, and agents, including governmental officials, NGOs, private investors, and international gentrifiers. The book takes us to a fascinating journey that starts at colonial land laws and urban planning, and ends with the exploration of people's subjectivities and their unconventional modes of resistance to the neoliberal commodification and governance of their city. This is a must read for anyone interested in the situated processes through which urban space is made, felt, lived, governed and consumed.  Scholars interested in global urban studies, neoliberalism, postcoloniality, political authoritarianism, governance, and resistance will find this study extremely insightful.

This is a fascinating study about a city in rapid transformation. Critically engaged and well-documented. Khalid Madhi convincingly exposes the interrelation between money, power and resistance in the remaking of Marrakesh. It reveals the many frictions behind the façade of a "world class destination" where tradition and modernity supposedly fuse together in perfect harmony. A very welcome contribution to the field of urban studies on the MENA-region.