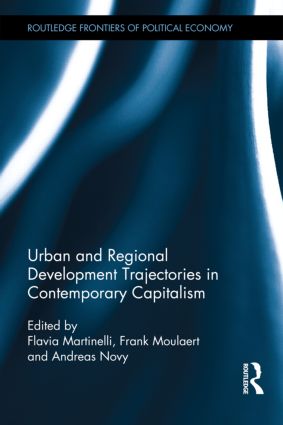 This book re-evaluates a rich scientific heritage of space- and history-sensitive development theories and produces an integrated methodology for the comparative analysis of urban and regional trajectories within a globalized world. The main argument put forward is that current mainstream analyses of urban and regional development have forgotten this rich heritage and fail to address the connections between different dimensions of development, the role of history and the importance of place and scale relations.

The proposed methodology integrates elements from different theories – radical economic geography, regulation approach, cultural political economy, old and new institutionalism – that all share a strong concern with time and space dynamics. They are recombined into an interdisciplinary (meta)theoretical framework, capable of articulating the overall problem of socio-economic development and providing methodological anchors for comparative case-study analysis, while recognizing context specificities. The analytical methodology focuses on key dynamics and relations, such as strategic agency and collective action, institutions and structures, culture and discourse, as well as the tension between path-dependency and path-shaping.

The methodology is then applied to eight urban and regional cases, mostly from Western Europe, but also from the United States and China. The case studies confirm the relevance of time- and space-sensitive analysis, not only for understanding development trajectories, but also for policy making. They ultimately highlight that, while post-war institutions were able to address systemic contradictions and foster a relatively inclusive development model, the neoliberal turn has led to reductionist policies that not only have resulted in an increase in social and spatial inequalities, but have also undermined growth and democracy.

Flavia Martinelli is Professor of Analysis of Territorial Systems in the School of Architecture at the University ‘Mediterranea’ of Reggio Calabria, Italy. Her research interests include regional development dynamics, inequalities and cohesion policies, with a focus on services and the Mezzogiorno.

Frank Moulaert is Professor of Spatial Planning and Head of the Planning and Development Unit ASRO at KU Leuven, Belgium. He specialises in research on social innovation and spatial development.

Andreas Novy is Professor of Development Studies at the Institute for the Environment and Regional Development of WU, the Vienna University of Economics and Business, Austria. He works on development and planning, social movements and governance, and transdisciplinary research.