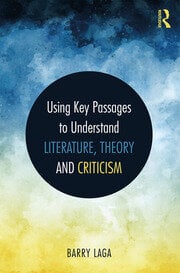 Built on the premise that scholars use theory pragmatically, Using Key Passages to Understand Literature, Theory and Criticism identifies problems, puzzles, and questions readers may encounter when they read a story, watch a film, or look at artwork. It explains, in detail, thirty concepts that help readers make sense of these works and invites students to apply the concepts to a range of writing and research projects. The textbook concludes by helping students read theory with an eye on finding productive passages and writing their own “theory chapter,” signaling a shift from student as critic to student as theorist.

Used as a main text in introductory theory courses or as a supplement to any literature, film, theater, or art course, this book helps students read closely and think critically.