Values and Identities in Europe
Evidence from the European Social Survey 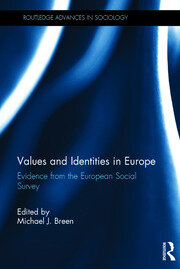 Values and Identities in Europe: Evidence from the European Social Survey

Contrary to what is suggested in media and popular discourses, Europe is neither a monolithic entity nor simply a collection of nation states. It is, rather, a union of millions of individuals who differ from one another in a variety of ways while also sharing many characteristics associated with their ethnic, social, political, economic, religious or national characteristics.

This book explores differences and similarities that exist in attitudes, beliefs and opinions on a range of issues across Europe. Drawing on the extensive data of the European Social Survey, it presents insightful analyses of social attitudes, organised around the themes of religious identity, political identity, family identity and social identity, together with a section on methodological issues. A collection of rigorously analysed studies on national, comparative and pan-European levels, Values and Identities in Europe offers insight into the heart and soul of Europe at a time of unprecedented change. As such, it will appeal to scholars across the social sciences with interests in social attitudes, social change in Europe, demographics and survey methods.

Chapter 1 The Significance of the European Social Survey, (Michael Breen)

Chapter 2 Predictors of Religious Exiting in Ireland: What can the six waves of the ESS tell us?, (Ryan Cragun)

Chapter 4 Religion and Values in the ESS: Individual and Societal Effects, (Caillin Reynolds)

Chapter 5 Work-life conflict of working couples before and during the crisis in 20 European countries, (Michael Ochsner and Ivett Szalma)

Chapter 12 Well-being in married and cohabiting families with children and social support during economic recession in Europe, (Mare Ainsaar)

Chapter 15 Using multiple datasets for common analysis on the basis of common identifiers: A case study from the European Social Survey and the European Values Study, (Brendan Halpin and Michael Breen)

Michael J. Breen is Chair of the European Social Survey (ESS) and Dean of the Faculty of Arts at Mary Immaculate College, University of Limerick, Ireland.