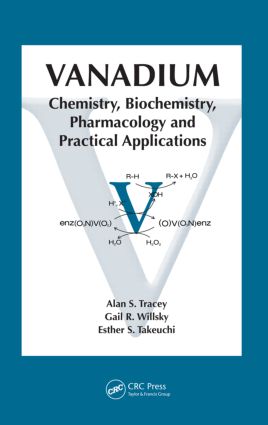 The first comprehensive resource on the chemistry of vanadium, Vanadium: Chemistry, Biochemistry, Pharmacology, and Practical Applications has evolved from over a quarter century of research that concentrated on delineating the aqueous coordination reactions that characterize the vanadium(V) oxidation state. The authors distill information on biological processes needed to understand vanadium effects in biological systems and make this information accessible to a wide range of readers, including chemists without extensive biological training.

Building a hierarchy of complexity, the book provides a discussion of some basic principles of 51V NMR spectroscopy followed by a description of the self-condensation reactions of vanadate itself. The authors delineate reactions with simple monodentate ligands and then proceed to more complicated systems such as diols, a-hydroxy acids, amino acids, peptides, to name just a few. They revisit aspects of this sequence later, but first highlight the influence the electronic properties of ligands have on coordination and reactivity. They then compare and contrast the influences of ligands, particularly those of hydrogen peroxide and hydroxylamine, on heteroligand reactivity.

The book includes coverage of vanadium-dependent haloperoxidases and model systems, vanadium in the environment, and technological applications. It also briefly covers the catalytic reactions of peroxovanadate and haloperoxidase model compounds. It contains a discussion of the vanadium haloperoxidases and the biological and biochemical activities of vanadium(V) including potential pharmacological applications. The last chapters step outside these boundaries by introducing some aspects of the future of vanadium in nanotechnology, the recyclable redox battery, and the lithium/silver vanadium oxide battery.

"The first comprehensive resource on the chemistry of vanadium, this book has evolved from over a quarter century of research that concentrated on delineating the aqueous coordination reactions that characterize the vanadium(V) oxidation state . . . make this information accessible to a wide range of readers . . ."

COORDINATION OF VANADATE BY HYDROGEN PEROXIDE AND HYDROXYLAMINES

INFLUENCE OF LIGAND PROPERTIES ON PRODUCT STRUCTURE AND REACTIVITY

Distribution in the Environment

THE INFLUENCE OF VANADIUM COMPOUNDS ON BIOLOGICAL SYSTEMS

Mechanism of Therapeutic and Apoptotic Effects of Vanadium