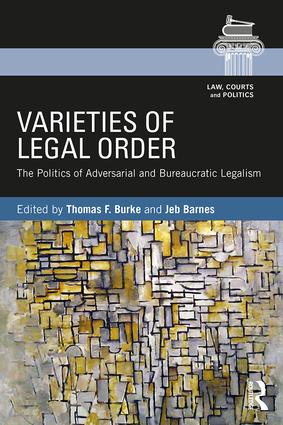 The Politics of Adversarial and Bureaucratic Legalism, 1st Edition

Across the globe, law in all its variety is becoming more central to politics, public policy, and everyday life. For over four decades, Robert A. Kagan has been a leading scholar of the causes and consequences of the march of law that is characteristic of late 20th and early 21st century governance. In this volume, top sociolegal scholars use Kagan’s concepts and methods to examine the politics of litigation and regulation, both in the United States and around the world.

Through studies of civil rights law, tobacco politics, “Eurolegalism,” Russian auto accidents, Australian coal mines, and California prisons, these scholars probe the politics of different forms of law, and the complex path by which “law on the books” shapes social life. Like Kagan’s scholarship, Varieties of Legal Order moves beyond stale debates about litigiousness and overregulation, and invites us to think more imaginatively about how the rise of law and legalism will shape politics and social life in the 21st century.

'Varieties of Legal Order is a fitting tribute to Robert Kagan. It contains an important set of essays by a prominent group of scholars who explore Kagan’s seminal distinction between adversarial and bureaucratic legalism in ways that should be of interest to scholars in many of fields.' - Herbert M. Kritzer, Marvin J. Sonosky Chair of Law and Public Policy, University of Minnesota

'This is a rich and diverse overview of the relationship between law, politics, and public policy. Leading scholars examine the political struggles over different forms of law and how those different forms shape social institutions. Varieties of Legal Order provides a thoughtful, nuanced introduction to a provocative set of conversations about the profusion of law across the globe.' - Susan S. Silbey, Leon and Anne Goldberg Professor of Sociology and Anthropology, and Professor of Behavioral and Policy Sciences, MIT

3. Seeing Through the Smoke: Adversarial Legalism and U.S. Tobacco Politics

5. Coping With Auto Accidents in Russia

6. Overcoming the Disconnect: Internal Regulation and the Mining Industry

8.Style Matters: On the Role of Pattern Analysis in the Study of Regulation

9. The Politics of Legalism

Thomas F. Burke is Professor of Political Science at Wellesley College. His research focuses on the place of rights and litigation in public policy, and the ways in which organizations respond to rights laws. His most recent books are How Policy Shapes Politics (2015), coauthored with Jeb Barnes, and the ninth edition of Reason in Law (2016) coauthored with Lief Carter. In a stroke of extraordinary luck, his Ph.D. dissertation, Litigation and its Discontents, was supervised by Robert Kagan. It won the 1996 Edwin S. Corwin Award for best dissertation in public law.

Jeb Barnes is Associate Professor of Political Science at the University of Southern California and a former Robert Wood Johnson Scholar in Health Policy Research. He is the author of five books and numerous peer-reviewed articles on the intersection of law, politics, and public policy and mixed-methods research strategies, most recently How Policy Shapes Politics (2015), coauthored with Thomas F. Burke, and Finding Pathways: Mixed-Method Research for Studying Causal Mechanisms (2014) coauthored with Nicholas Weller.

In Democracy in America, Alexis de Tocqueville famously noted that "scarcely any political question arises in the United States that is not resolved, sooner or later, into a judicial question." The importance of courts in settling political questions in areas ranging from health care to immigration shows the continuing astuteness of de Tocqueville’s observation. To understand how courts resolve these important questions, empirical analyses of law, courts and judges, and the politics and policy influence of law and courts have never been more salient or more essential.

Law, Courts and Politics was developed to analyze these critically important questions. This series presents empirically driven manuscripts in the broad field of judicial politics and public law by scholars in law and social science. It uses the most up to date scholarship and seeks an audience of  students, academics, upper division undergraduate and graduate courses in law, political science and sociology as well as anyone interested in learning more about law, courts and politics.