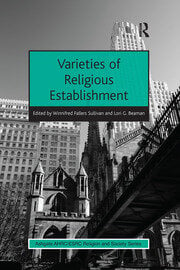 Advocacy for religious freedom has become a global project while religion, and the management of religion, has become of increasing interest to scholars across a wider range of disciplines. Rather than adopting the common assumption that religious freedom is simply incompletely realized, the authors in this book suggest that the starting point for understanding religion in public life today should be religious establishment. In the hyper-globalized world of the politics of religious freedom today, a focus on establishments brings into view the cultural assumptions, cosmologies, anthropologies, and institutions which structure religion and religious diversity. Leading international scholars from a diverse range of disciplines explore how countries today live with religious difference and consider how considering establishments reveals the limitations of universal, multicultural, and interfaith models of religious freedom. Examining the various forms religion takes in Tunisia, Canada, Taiwan, South Africa, and the USA, amongst others, this book argues that legal protections for religious freedom can only be understood in a context of socially and culturally specific constraints.

Winnifred Fallers Sullivan is Professor and Chair in the Department of Religious Studies, Indiana University Bloomington. She is the author of The Impossibility of Religious Freedom and Prison Religion: Faith-based Reform and the Constitution. She is also editor (with Robert Yelle and Mateo Taussig-Rubbo of After Secular Law. Lori G. Beaman, Ph.D., is the Canada Research Chair in the Contextualization of Religion in a Diverse Canada and Professor in the Department of Classics and Religious Studies at the University of Ottawa. Her publications include Defining Harm: Religious Freedom and the Limits of the Law (2008) and she is co-editor with Peter Beyer of Religion and Diversity in Canada (2008). She is principal investigator of a 37-member international research team whose focus is religion and diversity (religionanddiversity.ca).

’...the editors have managed to collect some extremely interesting and unique contributions and in editing a book that, while tackling a much abused subject, does so in a different, fresh, and compelling way.’ Religion and Human Rights