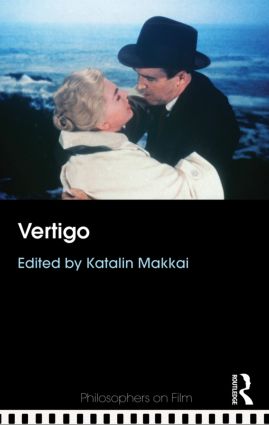 Released in 1958, Vertigo is widely regarded as Alfred Hitchcock’s masterpiece and one of the greatest films of all time. This is the first book devoted to exploring the philosophical aspects of Vertigo. Following an introduction by the editor that places the film in context, each chapter reflects upon Hitchcock’s filmfrom a philosophical perspective. Topics discussed include:

Including annotated further reading at the end of each chapter, this collection is essential reading for anyone interested in Vertigo, and an ideal resource for students of film and philosophy.

"Was Hitchcock merely a master of suspense, or as his French critics believed, also a master of ideas? This volume of stimulating, philosophically inclined interpretations of his magnificent film Vertigo proves that the French were right." - Richard Allen, New York University, USA

"Vertigo is arguably Hitchcock's masterpiece. This valuable collection helps reveal the many respects in which it is also his most philosophically engaging film." - Paul Muench, University of Montana, USA

"Although there is already a prodigious amount of Hitchcock scholarship available, Vertigo: Philosophers on Film is a welcome contribution to the field due to the quality of writing, the variety of issues explored, and the diversity of interpretations offered by the authors. This is a must read volume for any Hitchcock lover." -Erin Bradfield, Sewanee: The University of the South, USA

Katalin Makkai is Junior Professor of Philosophy at ECLA of Bard, Berlin (Germany). She is the author of "Kant on Recognizing Beauty," which appeared in European Journal of Philosophy.

'The true significance of film for philosophy, and of philosophy for film, cannot be established in abstract or general terms. It can only be measured in and through individual philosophers' attempts to account for their experience of specific films. This series promises to provide a productive context for that indispensable enterprise.' – Stephen Mulhall, Fellow and Reader in Philosophy, New College, Oxford

Film is increasingly used to introduce and discuss key topics and problems in philosophy, whilst some films raise important philosophical questions of their own. Yet until now, dependable resources for those studying and teaching philosophy and film have been limited. Philosophers on Film answers this growing need and is the first series of its kind. Each volume assembles a team of international contributors who explore a single film in depth. Beginning with an introduction by the editor, each specially-commissioned chapter discusses a key aspect of the film in question.

Additional features include a biography of the director and suggestions for further reading, making the series ideal for anyone studying philosophy, film and anyone with a general interest in the philosophical dimensions of cinema.