Victims and Perpetrators of Terrorism
Exploring Identities, Roles and Narratives 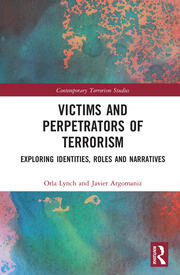 Victims and Perpetrators of Terrorism: Exploring Identities, Roles and Narratives

This volume examines how both victims and perpetrators of terrorism are relevant to our understanding of political violence.

While the perpetrators of political violence have been the subject of significant academic research, victims of terrorism and political violence have rarely featured in this landscape. In an effort to capture the vast complexity of terrorism, and to widen the scope of the agenda that informs terrorism research, this book presents a series of analyses that examines the role of the perpetrators, the experience of the victims, the public and media perceptions of both, and given the inherent intricacy of the phenomenon, how we might think about engaging with perpetrators in an effort to prevent further violence. By considering the role of the many actors who are central to our understanding and framing of terrorism and political violence, this book highlights the need to focus on how the interactivity of individuals and contexts have implications for the emergence, maintenance and termination of campaigns of political violence. The volume aims to understand not only how former perpetrators and victims can work in preventing violence in a number of contexts but, more broadly, the narratives that support and oppose violence, the construction of victimisation, the politicisation of victimhood, the justifications for violence and the potential for preventing and encouraging desistance from violence.

This book will be of much interest to students of terrorism and political violence, victimology, criminology, security studies and IR in general.

2. Memory, truth and justice: Understanding the experience of victims of terrorism and political violence. The cases of the United Kingdom and Spain, Agata Serranò, Orla Lynch, Javier Argomaniz and Cheryl Lawther

3. In the aftermath of terrorism: the structural challenges for incorporating victims’ voices, Anne-Marie Balbi

4. Not ideal victims but real victims: modes of response among survivors and families of victims of terrorism in Italy, 1969-1980, Susanna Vezzadini

5. Pressing for stability? The media, victims of terrorism and political violence in Northern Ireland, Peter Kelly

6. Meeting the needs of victims? Policing the past in Northern Ireland through the work of the Historical Enquiries Team, Annabelle De Heus

7. Victimology in Northern Ireland: Young loyalists and their search for identity, Cathrin Ruppe

8. Trust, engagement and disengagement: The role of trust in understanding the trajectory of political violence, John Morrison

9. Reintegrating radicals: A Strengths based approach to ‘deradicalisation’, Sarah Marsden

10. Doing Deradicalisation: A Profile of the Mentoring System and Providers in the UK, Doug Weeks

11. "Nobody has ever asked me these questions": Engaging restoratively with politically motivated prisoners in Northern Ireland, Tim Chapman

Orla Lynch is Director of Postgraduate Criminology at University College Cork, Ireland, a fellow with Hedayah, Abu Dhabi, and co-author of The Psychological Processes of Terrorism (2018).

is Lecturer in International Relations at the University of St Andrews and author of Post-9/11 EU Counter-Terrorism (Routledge, 2011).