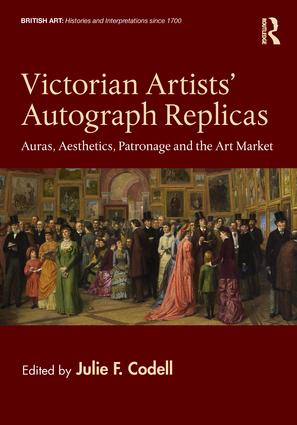 This book is a wide-ranging exploration of the production of Victorian art autograph replicas, a painting’s subsequent versions created by the same artist who painted the first version. Autograph replicas were considered originals, not copies, and were highly valued by collectors in Britain, America, Japan, Australia, and South Africa. Motivated by complex combinations of aesthetic and commercial interests, replicas generated a global, and especially transatlantic, market between the 1870s and the 1940s and almost all collected replicas were eventually donated to US public museums, giving replicas authority in matters of public taste and museums’ modern cultural roles. This book will be of interest to scholars in art history, museum studies, and economic history.

"At a time when the advantages of digital over analogue continue to be debated, Julie Codell has assembled an engaging group of scholarly essays that explore the ramifications of reproduction and replication on Victorian notions of originality."

2. The American Replica: The Politics and Status of the Artist's Autograph Replica in the Gilded Age - Jo Briggs

7. Ford Madox Brown, Cultural Experience and the Promise of the Replica - Colin Trodd

VI. Creativity, Reputation and the Market

13. From Replica to Original: Abraham Solomon and the Market for Modern-Life Subjects - Pamela Fletcher

14. Is He Repeating Himself? Creative, Aesthetic and Commercial Dialogue in the Replicas of John Frederick Lewis - Briony Llewellyn

15. Celebrated Variations on a Theme: The Replicas of Edward Coley Burne-Jones - Fiona Mann

British Art: Histories and Interpretations since 1700

This series exists to publish new and rigorous scholarship of the highest quality on British and Irish art after 1700. Proposals will offer new bodies of research or new interpretations, ideally both, and should demonstrate a clear awareness of the proposed volume's contribution to current and wider art-historical debates. We define British art broadly to mean art made in the British Isles or by British artists, and particularly welcome proposals which address the topic from international or comparative cultural perspectives. We also welcome proposals for intellectually ambitious studies concerning more localised areas, issues and themes within British and Irish art during this period. Above all, we encourage proposals for books on British and Irish art which transcend the descriptive in order to offer a broader methodological and/or historiographical contribution to the discipline of art history.