Victorians in the Mountains
Sinking the Sublime 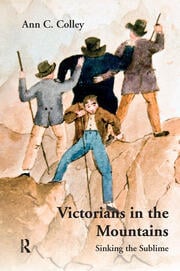 Victorians in the Mountains: Sinking the Sublime

In her compelling book, Ann C. Colley examines the shift away from the cult of the sublime that characterized the early part of the nineteenth century to the less reverential perspective from which the Victorians regarded mountain landscapes. And what a multifaceted perspective it was, as unprecedented numbers of the Victorian middle and professional classes took themselves off on mountaineering holidays so commonplace that the editors of Punch sarcastically reported that the route to the summit of Mont Blanc was to be carpeted. In Part One, Colley mines diaries and letters to interrogate how everyday tourists and climbers both responded to and undercut ideas about the sublime, showing how technological advances like the telescope transformed mountains into theatrical spaces where tourists thrilled to the sight of struggling climbers; almost inevitably, these distant performances were eventually reenacted at exhibitions and on the London stage. Colley's examination of the Alpine Club archives, periodicals, and other primary resources offers a more complicated and inclusive picture of female mountaineering as she documents the strong presence of women on successful expeditions in the latter half of the century. In Part Two, Colley turns to John Ruskin, Gerard Manley Hopkins, and Robert Louis Stevenson, whose writings about the Alps reflect their feelings about their Romantic heritage and shed light on their ideas about perception, metaphor, and literary style. Colley concludes by offering insights into the ways in which expeditions to the Himalayas affected people's sense of the sublime, arguing that these individuals were motivated as much by the glory of Empire as by aesthetic sensibility. Her ambitious book is an astute exploration of nationalism, as well as theories of gender, spectacle, and the technicalities of glacial movement that were intruding on what before had seemed inviolable.

Contents: Introduction; Part I Tourists, Climbers, and the Sublime: Sinking the sublime; Spectators, telescopes, and spectacle; Ladies on high. Part II Literary Figures in the Alps: John Ruskin: climbing and the vulnerable eye; Toothpowder and breadcrumbs: Gerald Manley Hopkins in the Alps; Snowbound with Robert Louis Stevenson. Part III Coda: The Himalaya and the persistence of the sublime; Bibliography; Index.

Ann C. Colley is a SUNY Distinguished Professor at the State University College of New York at Buffalo. She has published numerous articles and books, including Robert Louis Stevenson and the Colonial Imagination, Nostalgia and Recollection in Victorian Culture, The Search for Synthesis in Literature and Art: The Paradox of Space, Edward Lear and the Critics, and Tennyson and Madness.

"Insightful and informative, Victorians in the Mountains is an impressively researched and delightfully written book. It will be of interest not only to scholars of nineteenth- and early twentieth-century British literature and culture, but also to those interested in the history of mountain climbing."

"Impressively original and comprehensive. This account of the role that mountains played in the British imagination throughout the Victorian period challenges many preconceptions, showing how an invasion of climbers and tourists transformed Romantic ideas of the sublime. Spirited, irreverent and always well-informed, Colley sheds new light on a complex and important topic."

"Having challenged some common assumptions about the Victorians and mountains in general [...] Colley focuses on the mountain experiences of three important literary figures, devoting one chapter each to John Ruskin, Gerard Manley Hopkins, and Robert Louis Stevenson. Among its many insights, Colley's study helps us to grasp from a new angle the physical nature of understanding for these three figures. She adds to current debates on all three by offering a nuanced interpretation of how seeing and being within the mountain landscapes affected the writing of each... [A] delightful yet scholarly study..."

"... Colley is to be applauded for providing an insight into rich and neglected archives which shed light not only on mountaineering, but the philosophical, ideological and patriotic notions through which it is constituted and understood."

"Colley expertly weaves an abundance of primary and scholarly sources into her own writing. Thus, readers will find the chapters helpful in examining particulars of Victorian culture and well-known writers of the time."