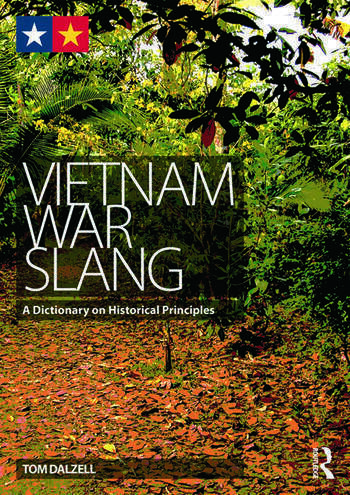 In 2014, the US marks the 50th anniversary of the Gulf of Tonkin Resolution, the basis for the Johnson administration’s escalation of American military involvement in Southeast Asia and war against North Vietnam. Vietnam War Slang outlines the context behind the slang used by members of the United States Armed Forces during the Vietnam War.

Troops facing and inflicting death display a high degree of linguistic creativity. Vietnam was the last American war fought by an army with conscripts, and their involuntary participation in the war added a dimension to the language.  War has always been an incubator for slang; it is brutal, and brutality demands a vocabulary to describe what we don’t encounter in peacetime civilian life.  Furthermore, such language serves to create an intense bond between comrades in the armed forces, helping them to support the heavy burdens of war.

The troops in Vietnam faced the usual demands of war, as well as several that were unique to Vietnam – a murky political basis for the war, widespread corruption in the ruling government, untraditional guerilla warfare, an unpredictable civilian population in Vietnam, and a growing lack of popular support for the war back in the US.  For all these reasons, the language of those who fought in Vietnam was a vivid reflection of life in wartime.

lays out the definitive record of the lexicon of Americans who fought in the Vietnam War.  Assuming no prior knowledge, it presents around 2000 headwords, with each entry divided into sections giving parts of speech, definitions, glosses, the countries of origin, dates of earliest known citations, and citations. It will be an essential resource for Vietnam veterans and their families, students and readers of history, and anyone interested in the principles underpinning the development of slang.

"War breeds slang: and the longer that war the better. Other than World War I Vietnam was perhaps combat's greatest creator of new language. In his wide-ranging, authoritative dictionary, Tom Dalzell, one of America's leading lexicographers of slang, has brought it all together: from mummy sacks to the long long duck's back and the remfs to the Arvins. This a unique, unrivalled take on a war that remains a key moment in modern history. Tim O’Brien has written about ‘The Things They Carried’; now Tom Dalzell brings us ‘The Words They Used’" Jonathon Green, author of Green's Dictionary of Slang

"Tom Dalzell’s extraordinary Vietnam War Slang invites us to look back through the words and meanings of the Vietnam era — fascinating in themselves — into the culture they signify. Each entry includes a contemporary quotation or two, illustrating use of the word in question, and thus the dictionary is an anthology of fading voices from distant decades amplified into the twenty-first century, voices we need to hear. It should be in every American library, on every word-lover’s bookshelf, and assigned in every university course about the period or the phenomenon of the Vietnam War." Michael Paul Adams, Indiana University, USA