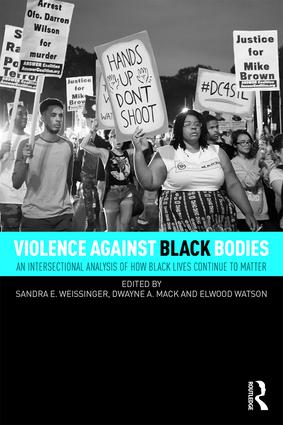 An Intersectional Analysis of How Black Lives Continue to Matter, 1st Edition

Violence Against Black Bodies argues that black deaths at the hands of police are just one form of violence that black and brown people face daily in the western world. rough the voices of scholars from different academic disciplines, this book gives readers an opportunity to put the cases together and see that violent deaths in police custody are just one tentacle of the racial order—a hierarchy which is designed to produce trauma and discrimination according to one’s perceived race-ethnicity.

There is No Time for Despair: (Re) Working the Racial Order

1 The Fires of Racial Discontent are Burning! Intensely!

2 Rage and Activism: The Promise of Black Lives Matter

The Space of trauma: Violence to the Psyche, Body, and Home

4 When No Place is Safe: Violence Against Black Youth

5 Death by Residential Segregation and the Post-Racial Myth

6 Vigilant Vagrants: The Turbulent Tale of the Queer Black Man

Media Fallacies: Stereotypes and Other Obliterations of Black Realities

7 The Revelatory Racial Politics of The Sopranos: Black and Brown Bodies and Storylines as

Props and Backdrop in the Normalization of Whiteness

8 From Mammy to Black-ish: The Perceived Evolution of the Black American Typecast

9 For the World to See: Bestiality Against Black Bodies and the Deleterious Effects of

11 "The Multicultural Dilemma": Ignoring Racism in the Works of James Howard Kunstler

12 Callous Cruelty: The School-to-Prison Pipeline as Violence Against Black and Brown

13 Blood at the Root: The False Equivalency of External and Internal Violence Against Blacks

is Associate Professor of History at Berea College. He is the lead editor of Beginning a Career in Academia: A Guide for Graduate Students of Color (Routledge, 2015), Mentoring Faculty of Color: Essays on Professional Advancement in Colleges and Universities (McFarland Publishers, 2013), and author of Black Spokane: The Civil Rights Struggle in the Inland Northwest (University of Oklahoma Press, 2014).

is Professor of History and African American Studies at East Tennessee State University. He is the editor and co-editor of several volumes including Generation Speaks: Voices from Academia (Scarecrow Press, 2013), Beginning a Career in Academia: A Guide for Graduate Students of Color (Routledge, 2015), and The Oprah Phenomenon (University of Kentucky Press, 2007). His most recent authored book is Performing American Masculinity: The Twenty First Century Man in Popular Culture (Indiana University Press, 2011).