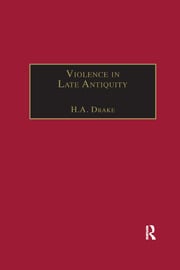 'Violence' is virtually synonymous in the popular imagination with the period of the Later Roman Empire-a time when waves of barbarian invaders combined with urban mobs and religious zealots to bring an end to centuries of peace and serenity. All of these images come together in the Visigothic sack of the city of Rome in A.D. 410, a date commonly used for the fall of the entire empire. But was this period in fact as violent as it has been portrayed? A new generation of scholars in the field of Late Antiquity has called into question the standard narrative, pointing to evidence of cultural continuity and peaceful interaction between "barbarians" and Romans, Christians and pagans. To assess the state of this question, the fifth biennial 'Shifting Frontiers' conference was devoted to the theme of 'Violence in Late Antiquity'. Conferees addressed aspects of this question from standpoints as diverse as archaeology and rhetoric, anthropology and economics. A selection of the papers then delivered have been prepared for the present volume, along with others commissioned for the purpose and a concluding essay by Martin Zimmerman, reflecting on the theme of the book. The four sections on Defining Violence, 'Legitimate' Violence, Violence and Rhetoric, and Religious Violence are each introduced by a theme essay from a leading scholar in the field. While offering no definitive answer to the question of violence in Late Antiquity, the papers in this volume aim to stimulate a fresh look at this age-old problem.

Harold A. Drake is Professor in the Department of History at the University of California, Santa Barbara, USA.

’Although the volume can best be appreciated by scholars of late antiquity, the essays are nevertheless accessible to non-specialists. As a matter of fact, for the latter group, the wide range of topics in the volume will likely give as good an introduction to late antiquity as an introductory text... This volume is recommended for university and seminary libraries.’ Church History ’No-one will be flinging this book across the room in frustration at its pretentious jargon or at the inability of the various contributors to get to their point. Furthermore, unlike many similar collections, the papers collected here come together very well to form a coherent volume on a well-defined topic... No-one will fail to benefit from this collection, and several of the papers will undoubtedly form the best and easiest reference points for the topics which they discuss for many years to come.’ Classics Ireland 'This collection of papers is a valuable addition, not just to the history of violence but to the field of late antiquity in general.' Prudentia