Visual Acuity and the Arts of Communication in Early Modern Germany 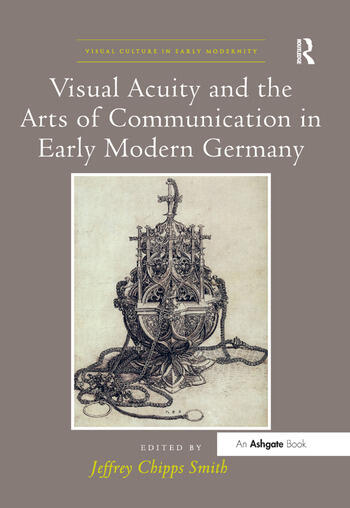 Visual Acuity and the Arts of Communication in Early Modern Germany

During the early modern period, visual imagery was put to ever new uses as many disciplines adopted visual criteria for testing truth claims, representing knowledge, or conveying information. Religious propagandists, political writers, satirists, cartographers, the scientific community, and others experimented with new uses of visual images. Artists, writers, preachers, musicians, and performers, among others, often employed visual images or conjured mental images to connect with their audiences. Contributors to this interdisciplinary collection creatively explore how the exponential growth in images, especially prints, impacted the intellectual horizons and the visual awareness of viewers in early modern Germany. Each of the chapters serves as a case study for one or more of the volume’s sub-themes: art, visual literacy, and strategies of presentation; audience and the art of persuasion; the art of envisioning; the ephemeral arts and theatricality; the built environment and spatial settings; and the history of the visual.

Jeffrey Chipps Smith is Kay Fortson Chair in European Art at the University of Texas at Austin, USA.

"Visual Acuity and the Arts of Communication in Early Modern Germany, edited by Jeffrey Chipps Smith, puts productive pressure on its period’s blind spots. Its essays consider German visual culture from the late fifteenth to early eighteenth centuries by means of healthy reliance on present-day creativity and hermeneutic skill. ... Focused on the power of visualization, the authors use early modern objects and texts largely as a prompt for investigating aspects of visual culture that early modern people seem not to have written much about. ...[T]he notion of 'visual acuity' here affirms a keenness of perception and interpretation on the parts of both maker and scholar, as it builds on the material, object, and social focuses of previous decades of art history." - CAA Reviews

"Established scholars and graduate students come together in this volume to explore relationships between art and understanding during the early modern period. This truly interdisciplinary volume connects historians, art historians, music historians, and literary scholars whose essays range from calligraphy to performance to architecture." - Renaissance Quarterly

"[The] selected essays, which are contextualized and harmonized in [Chipps Smith's] wonderful introduction, demonstrate the elegant simplicity of acute seeing. ...The issues laid bare in this volume - visual literacy, copies and emulation, memory and devotion, and the arts of communication and reception - are indeed all topics of acute interest to scholars of early modern as well as medieval Germany." - Sehepunkte

"Visual Acuity and the Arts of Communication in Early Modern Germany would be a worthy addition to the library of any scholar of the arts and communication, visual or otherwise, in sixteenth-century Germany." - Sixtennth Century Journal

"The theme appealed to Smith as an art historian, and many essays in the volume are by FNI participants in that field. Other essays demonstrate that historians and scholars of music or literature also have much to gain - and to add - by engaging with visual images and considering the act of seeing." - Historians of Netherlandish Art

"The broad scope of topics make this volume dynamic and interesting. By taking an individual case-study approach rather than forcing an attempt at a larger synthesis, editor Jeffrey Chipps Smith and the contributors have created a volume that highlights the multiplicity of ways in which visual presentation and reception were utilized in early modern Germany." - Journal of Jesuit Studies

"This edited collections makes a significant contribution to several areas of study. In treating Spanish Habsburg festivals as part of "one cultural system", it advances the scholarship of these ceremonies beyond the geographical compartmentalization that has characterized the field. (...) Whereas existing collections have relied on festival texts as evidence, this work incorporate material, visual, and musical culture, through examinations of tapestries, musicians and engravings. To read this book is to encounter the early modern festival in all its richness and complexity." - Bobbi Dykema, Strayer University, Reviewed in the Sixteenth Century Journal, Spring 2017