Vladimir Markov and Russian Primitivism
A Charter for the Avant-Garde 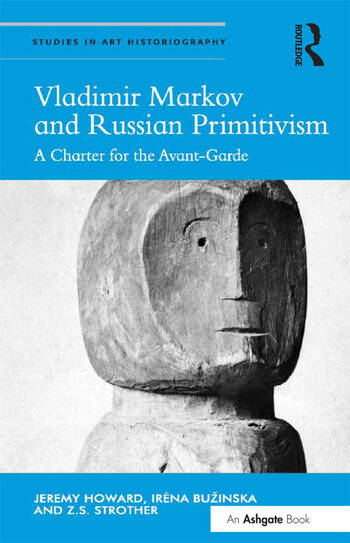 Vladimir Markov and Russian Primitivism: A Charter for the Avant-Garde

Hailed as a brilliant theoretician, Voldemārs Matvejs (best known by his pen name Vladimir Markov) was a Latvian artist who spearheaded the Union of Youth, a dynamic group championing artistic change in Russia, 1910-14. His work had a formative impact on Malevich, Tatlin, and the Constructivists before it was censored during the era of Soviet realism. This volume introduces Markov as an innovative and pioneering art photographer and assembles, for the first time, five of his most important essays. The translations of these hard-to-find texts are fresh, unabridged, and authentically poetic. Critical essays by Jeremy Howard and Irena Buzinska situate his work in the larger phenomenon of Russian ’primitivism’, i.e. the search for the primal. This book challenges hardening narratives of primitivism by reexamining the enthusiasm for world art in the early modern period from the perspective of Russia rather than Western Europe. Markov composed what may be the first book on African art and Z.S. Strother analyzes both the text and its photographs for their unique interpretation of West African sculpture as a Kantian ’play of masses and weights’. The book will appeal to students of modernism, orientalism, ’primitivism’, historiography, African art, and the history of the photography of sculpture.

'Howard, Buzinska and Strother should be congratulated for bringing a swathe of new material and analyses to this dynamic and complex phenomenon.'

- The Slavonic and East European Review

'One hopes that this book, by collecting andcontextualizing these sources, will make Markov more accessible to scholars of Russian and Europeanart historiography. Indeed, Vladimir Markov and Russian Primitivism will undoubtedly serve as avaluable source and inspiration for future work.As a striking portrait of the truly singular figure Vladimir Markov, Howard, Buzinska, and Strother make him legible to a large international and interdisciplinary audience, and also suggest avenues for how Markov and others might challenge our “hardening narratives of primitivism,” and I would add, modernism, more generally.'

'Markov's writings provide a rare and archival dimension to the project. Also rare are the reproductions of Markov's stunning photographs of primal sculptures far from the centers of European imperial power. They eloquently articulate the implications of his texts while illustrating the contributors' discourses.'

'Vladimir Markov and Russian Primitivism: A Charter for the Avant-Garde is a stellar contribution to the literature on primitivism and its complex relationship to the formation of the European avant-garde. A combination of new translations of Markov’s seminal texts and critical assessments by Irena Buzinska, Jeremy Howard, and Z.S. Strother, this text expands our understanding of how non-Western art traditions were regarded in the early twentieth-century and, in the process, underscores the myriad uses and perceptions of "the primitive" in currency before the First World War. Markov’s texts offer to contemporary readers different and surprising examples of European entanglements with primitivism. In addition to further cementing the primacy of primitivism to the formation of European modernism, the authors’ discussions effectively position Markov’s central position in these important developments.'

'Both academically serious and captivating, this collection probes global problems of culture while simultaneously investigating distinct details of human life. For too long Voldemars Matvejs (Vladimir Markov) has remained in the shadow of his contemporaries. Finally, he is awarded his rightful place in the history of Russian and European Avant-Garde and of twentieth century art. Here, the historical and national context which formed Matvejs’ aesthetics has been explored alongside its empirical sources. Furthermore, his "Primitivism" has been synthesised with theories of contemporaries such as Roerich, Kandinsky, Goncharova, Filonov, Shevchenko and Rozanova, and conjoined with the subsequent critical discourse. Special attention has been afforded to Matvejs’ unique photographic heritage. The authors convincingly reveal that his photographs of African, Polynesian and North Asian sculpture go beyond illustration to intrinsic analysis of representation, demonstrating how his photographic strategy and technique (multiplicity of angles, close-ups, "portraitism", order of display and comparison) led to new understandings of the principles of the artistic image, as well as to the development of a new, non-classical artistic ideal. For the first time, Matvejs' ideas have been captured with completeness and profundity, making the prime significance of this book the appearance of Matvejs' "own voice".'

'Vladimir Markov and Russian Primitivism: A Charter for the Avant-Garde provides a much-needed examination of the career and work of Vladimir Markov, or VoldemAurs Matvejs, the Latvian-born cultural theorist, most famous for his pioneering work on African art. This volume challenges histories of primitivist dialogue between the West and its "other", bringing out the complexity of Markov's identity and intellectual affiliations as a Latvian raised to speak German, working in St Petersburg. If the reception of African art in the early twentieth century is seen to be mediated by the colonial ambitions of the major Western powers, this collection of essays complicates and enriches our understanding of this by their focus on Eastern Europe and Russia, and their connections to Asia, proposing a model of cultural syncretism rather than hegemonic encounter.'