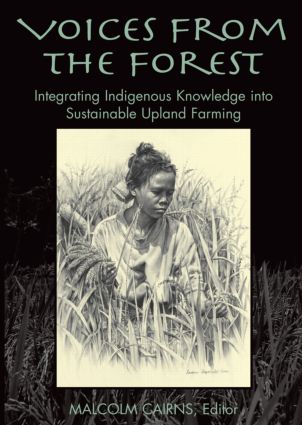 Voices from the Forest

This handbook of locally based agricultural practices brings together the best of science and farmer experimentation, vividly illustrating the enormous diversity of shifting cultivation systems as well as the power of human ingenuity. Environmentalists have tended to disparage shifting cultivation (sometimes called 'swidden cultivation' or 'slash-and-burn agriculture') as unsustainable due to its supposed role in deforestation and land degradation. However, a growing body of evidence indicates that such indigenous practices, as they have evolved over time, can be highly adaptive to land and ecology. In contrast, 'scientific' agricultural solutions imposed from outside can be far more damaging to the environment. Moreover, these external solutions often fail to recognize the extent to which an agricultural system supports a way of life along with a society's food needs. They do not recognize the degree to which the sustainability of a culture is intimately associated with the sustainability and continuity of its agricultural system. Unprecedented in ambition and scope, Voices from the Forest focuses on successful agricultural strategies of upland farmers. More than 100 scholars from 19 countries--including agricultural economists, ecologists, and anthropologists--collaborated in the analysis of different fallow management typologies, working in conjunction with hundreds of indigenous farmers of different cultures and a broad range of climates, crops, and soil conditions. By sharing this knowledge--and combining it with new scientific and technical advances--the authors hope to make indigenous practices and experience more widely accessible and better understood, not only by researchers and development practitioners, but by other communities of farmers around the world.

'An academic and development milestone. There is an urgent need to improve the management of shifting cultivation and an urgent need for relevant research. The natural resource base of the areas studied in the book provides food and nutritional security for millions of poor shifting cultivators and has an essential role in biodiversity and ecosystem services . . .Essential for students, researchers, and development workers.' Percy Sajise, Bioversity International 'Voices in the Forest illustrates the adaptability of an ancient agricultural technology that, confounding critics for over a century, continues to assert a place for itself in the modern, globalizing world. More than ten years in the making, it is one of the most comprehensive looks at swidden agriculture in a generation. . . . Of most importance, the emphasis is not on the problems that swidden agriculture creates but on the solutions that it offers.' Michael R. Dove, Yale University 'Voices from the Forest provides a robust defense against the largely undeserved bad reputation associated with shifting cultivation that has persisted for almost a century. Bringing together the best of science and farmer experimentation, the book illustrates the enormous diversity and dynamism of this highly resilient long-established agricultural system.' Juan M. Pulhin, University of the Philippines Los Ba os

Malcolm Cairns is a research scholar at the Australian National University in the Research School of Pacific and Asian Studies, Department of Anthropology.