Voicing the Popular
On the Subjects of Popular Music 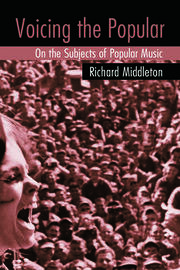 Voicing the Popular: On the Subjects of Popular Music

How does popular music produce its subject? How does it produce us as subjects? More specifically, how does it do this through voice--through "giving voice"? And how should we understand this subject--"the people"--that it voices into existence? Is it singular or plural? What is its history and what is its future?

Voicing the Popular draws on approaches from musical interpretation, cultural history, social theory and psychoanalysis to explore key topics in the field, including race, gender, authenticity and repetition. Taking most of his examples from across the past hundred years of popular music development--but relating them to the eighteenth- and nineteenth-century "pre-history"--Richard Middleton constructs an argument that relates "the popular" to the unfolding of modernity itself. Voicing the Popular renews the case for ambitious theory in musical and cultural studies, and, against the grain of much contemporary thought, insists on the progressive potential of a politics of the Low.

Richard Middleton is Professor of Music at Newcastle University(UK). He is one of the most widely respected scholars of popular music, having authored numerous books including the classic Studying Popular Music(1990) and Reading Pop (2000), and co-founded the leading journal in the field, Popular Music, serving on its editorial board from 1981-1986. He was coeditor of The Cultural Study of Music (Routledge, 2003). Middleton has also contributed to many standard music reference works.

Voicing the Popular already marks one of the paradigmatic moments in popular-music studies in the twenty-first century. Richard Middleton makes a turn toward a new set of issues of a humanistically based scholarship – poverty, working-class culture, racism, gender. Precisely because of his conviction that it is music that "voices the popular," he refuses to neglect the music. In Voicing the Popular Richard Middleton launches his most intensive examination of race and racism to date. In the early chapters he opens an analytical space between study of the blues and the historical trajectory of the minstrel stage, culminating in a powerful reading of Show Boat. In subsequent chapters we witness him again insisting that interpretation of the music, too, must accompany our location of the voice, as he analyzes a history of standards that stretches from Monteverdi to Percy Sledge. The book closes with a fresh approach to authenticity, which does not hesitate to confront the reader with the troubling contexts within which popular music has been created in the recent past, particularly through his examination of the Buena Vista Social Club. It is in Voicing the Popular that Richard Middleton most passionately locates popular music in the domain of the people themselves.--Philip V. Bohlman, University of Chicago, author of The Study of Folk Music in the Modern World and World Music: A Very Short Introduction

Richard Middleton's Voicing the Popular cannot but inspire profound admiration. On the one hand, it displays a vast, astounding knowledge in contemporary critical theory and an impressive mastery and lucidity in treating its object, popular music, and on the other hand his devoted and passionate conceptual work shows the ways in which both things, the theoretical concepts and the popular, can be brought together in a way to elucidate each other, comment and displace each other, so that we are brought to experience both, the theory and the popular culture, in new ways, with new eyes and ears. From Mozart’s Magic Flute to the Spice Girls his magisterial voice leads us through the multi-faceted network of modernity’s popular underside.--Mladen Dolar, University of Ljubljana, author of A Voice and Nothing More

The publication of Voicing the Popular is a threshold event in the study of popular culture and for that matter in the study of culture generally. No concept has been more, well, popular in the past half-century than the "popular," and none has been more loosely conceptualized and taken for granted. No longer. Richard Middleton has raised a discussion to which he has himself already contributed invaluably to an unprecedented level of intellectual rigor and theoretical sophistication. His specific historical thesis linking the popular to modernity is one that is bound to become fundamental for the future study of either. And those interested particularly in the "voicing" part—that is, in the role of music in the construction of the popular—will be amply provoked and enlightened by what they find here.--Lawrence Kramer, Fordham University, author of Classical Music and Postmodern Knowledge and Musical Meaning: Towards a Critical History