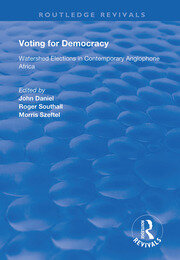 First published in 1999, the essays in this book examine the context and conduct of a series of watershed elections held in Anglophone Africa in the first half of the 1990s. These elections crystallized a wider process of democratization, underway in much of sub-Saharan Africa during the last decade, in which attempts were made to shift from various forms of authoritarian rule (colonial or racial oligarchies, military regimes, one-party states, or presidential rule) to pluralist parliamentary politics.

This volume brings together for the first time, studies of these events in countries sharing a comparable legacy of British colonialism, an acquaintance with the Westminster constitutional tradition and related experiences of decolonization and democratic struggle. Written from a variety of perspectives by contributors with first-hand knowledge and long experience of research in Africa, the papers situate each election in its wider political context, examining the political forces at work and the events which gave rise to reform. All indicate that, despite Western pressure for reform and the influence of the collapse of the Soviet Bloc in Eastern Europe, internal African demands for democracy provided the primary driving force for change.

Not all the elections fulfilled the hopes invested in them. In Nigeria, they were annulled before all the votes had been counted. In Kenya, the disarray of the opposition ensured the return to power of the old order. Even where they produced a successful regime transition, the democratic credentials of the new governments were sometimes seriously flawed. Yet for all these limitations, these watershed elections signalled important progress for African democracy. They brought a formal end to colonial rule in Namibia and to three centuries of racial discrimination in South Africa. They brought changes of government through the ballot box in Zambia and Malawi, among the first instances in Africa of such change being accomplished without the use of force.

Above all, they provided African electorates with an opportunity to pass judgement on long-serving authoritarian regimes – with unequivocal results: in every case, when given the chance to vote, Africans voted for democracy.

1. Political Crisis and Democratic Renewal in Africa. Morris Szeftel. 2. Electoral Systems and Democratization in Africa. Roger Southall. 3. Electoral Corruption and Manipulation in Africa: the Case for International Monitoring. John Daniel and Roger Southall. 4. The 1989 Elections and the Decolonization of Namibia. Lionel Cliffe and Donna Pankhurst. 5. Democratization and the 1991 Elections in Zambia. Carolyn Baylies and Morris Szeftel. 6. Kenya: The Survival of the Old Order. Rok Ajulu. 7. Settling Old Scores: From Authoritarianism to Dependent Democracy in Lesotho. Roger Southall. 8. Blocked Transition in Nigeria: Democracy and the Power of Oligarchy. Chudi Okoye. 9. The Democratic Transition in Malawi: from Single-Party Rule to a Multi-Party State. Diana Cammack. 10. Choosing ‘The Freedom to be Free’: the South African General Elections of 1994. Roger Southall and Morris Szeftel. 11. Conclusion: False Dawn or Democratic Opening? John Daniel and Roger Southall.

’...first hand knowledge and long experience of research in Africa have given us a thought provoking book. Voting for Democracy should be recommended reading for current and aspiring politicians in Africa and for those who are in the business of monitoring elections on the continent.’ AfriMedia International ’...provides a well-balanced and intergrated assessment of the prospects for democracy on the African continent...interesting and stimulating reading...’ Democratization