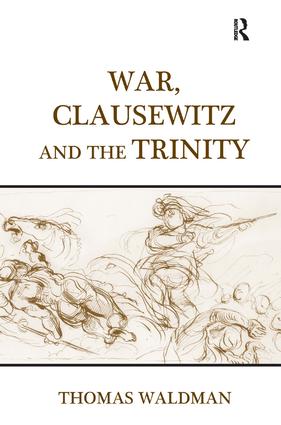 War, Clausewitz and the Trinity

Today, the ideas of Carl von Clausewitz (1780-1831) are employed almost ubiquitously in strategic studies, military history and defence literatures, but often in a manner which distorts their true meaning. In this book, Waldman explores Clausewitz’s central theoretical device for understanding war - the ’remarkable trinity’ of politics, chance and passion. By situating the great Prussian in historical context, he presents a conception truer to Clausewitz’s intention. Seeking to achieve this through an in-depth reinterpretation of On War and Clausewitz’s other writings, conducted through the prism of the trinity, this book draws on existing studies but argues that there is room for clarification. It presents fresh perspectives into aspects of Clausewitz's thought and emphasises elements of his theory that have often been neglected. Furthermore, it provides a solid basis from which debate on the nature of modern war can move forward.

’In this committed and intelligent exploration of Clausewitz's dynamic framework for the understanding of war, Thomas Waldman demonstrates the continuing value of the "remarkable trinity" of passion, chance and policy for understanding war. He uses it to engage directly with Clausewitz, as well as with his many critics and interpreters.’ Sir Lawrence Freedman, King's College London, UK ’Thomas Waldman penetrates to the core of Clausewitz’s timeless insights into war and politics and provides the essential modern guide to understanding his work and its continuing relevance. Clausewitz has been endlessly misunderstood. Waldman corrects those errors, focussing on the Trinity - or multiple trinities - identified by Clausewitz - that war is the unlikely alloy of primordial passion, logic and luck.’ Chris Bellamy, Greenwich Maritime Institute, UK ’Waldman provides a deep and insightful discussion of the relevance of classical Clausewitzian political-military theory to war in both the historical and contemporary worlds - a potent antidote to the ahistorical imaginings of the New Wars� scholars.’ Christopher Bassford, National Defense University, USA and editor of The Clausewitz Homepage 'Few thinkers in the fields of politics and strategy are as instantly recognisable as Carl von Clausewitz, the 19th century military historian from Germany best known for his maxim, War is merely the continuation of politics by other means.� Unfortunately for Clausewitz, owing to the catchiness of this quote, it is by now commonly taken to encapsulate his contribution to political thought. Thomas Waldman’s War, Clausewitz and the Trinity is a convincing antidote to this one-dimensional view, focusing on the conceptual trinity that Clausewitz argued makes up war: passion, chance, and politics. The book is an accessible introductory text for students of politics and war, as well as a research study that aims to provide a clearer depiction of Clausewitz’s thought