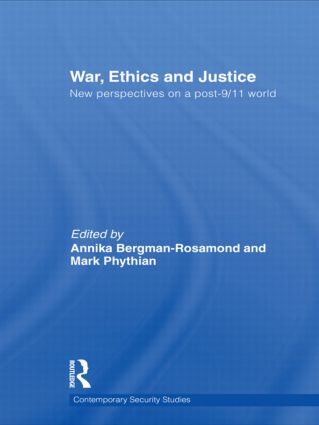 This edited volume addresses the key issues of ethics, war and international relations in the post-9/11 world.

There is a lively debate in contemporary international relations concerning the relationship between statist obligations to one’s own political community and cosmopolitan duties to distant others. This volume contributes to this debate by investigating aspects of the ethics of national military and security and intelligence policies in the post-9/11 environment. The discursive transformation of national militaries into ‘forces for good’ became normalized as the Cold War subsided. While the number of humanitarian military interventions and operations rose considerably in the immediate post-Cold War period, the advent of the ‘war on terror’ raised questions about exactly what we mean by ethical behaviour in terms of military and security policies. This volume interrogates this key question via a focus that is both distinctive and illuminating – on national military ethics; femininities, masculinities and difference; and intelligence ethics. The key objectives are to demonstrate the important linkages between areas of international relations that are all too often treated in isolation from one another, and to investigate the growing tension between cosmopolitan and communitarian conceptions of intelligence and security and the use of armed force.

This book will be of much interest to students of security studies, ethics, gender studies, intelligence studies, and international relations in general.

Mark Phythian is Professor of Politics in the Department of Politics and International Relations at the University of Leicester. He is the author or editor/co-editor of ten books.

Annika Bergman-Rosamond is Senior Researcher at the Danish Institute for International Studies in Copenhagen.

Introduction: War, Ethics and Justice – New Perspectives on a Post-9/11 World Annika Bergman-Rosamond and Mark Phythian 1. Tactics of Mistake: ‘Torture’, Security and the Ethics of ‘Liberal’ Wars After 9/11 Caroline Kennedy-Pipe 2. ‘Let us Re-order This World Around Us’: The Problematic Subject of British Military Ethics Dan Bulley 3. An Australian Approach to Ethical Warfare? Australia and the ‘War on Terror’ Thomas Moore 4. The Cosmopolitan- Communitarian Divide and the Swedish Military Annika Bergman-Rosamond 5. Ambivalent Spectators and Enthusiastic Fans? Mapping Civilian-Military Engagement in Canada Lori Crowe and Chris Hendershot 6. Ethics, Gender and Forces for Good: Military Masculinities in British Soldiers’ Accounts of Iraq and Afghanistan Claire Duncanson 7. Feminist International Relations and Intelligence in a High-Tech Age Gillian Youngs 8. The Problem of Intelligence Ethics Mark Phythian 9. Justice and Ethics in Israeli Counter-Terrorism Shlomo Shpiro 10. Jihad and the ‘War on Terror’: Intelligence, Ethics, and Justice in Pakistan and Afghanistan Rob Johnson

Annika Bergman-Rosamond is Senior Researcher at the Danish Institute for International Studies in Copenhagen.

Mark Phythian is Professor of Politics in the Department of Politics and International Relations at the University of Leicester. He is the author or editor/co-editor of ten books.